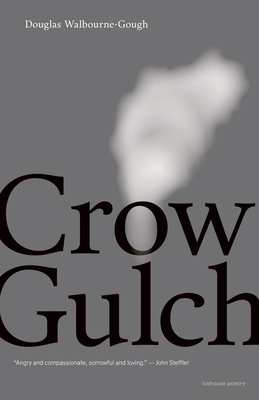 By Douglas Walbourne-Gough
$19.95
Unavailable, Out of Stock, or Out of Print

From the author: I cannot let the story of Crow Gulch -- the story of my family and, subsequently, my own story -- go untold. This book is my attempt to resurrect dialogue and story, to honour who and where I come from, to remind Corner Brook of the glaring omission in its social history.

In his debut poetry collection, Douglas Walbourne-Gough reflects on the legacy of a community that sat on the shore of the Bay of Islands, less than two kilometres west of downtown Corner Brook.

Crow Gulch began as a temporary shack town to house migrant workers in the 1920s during the construction of the pulp and paper mill. After the mill was complete, some of the residents, many of Indigenous ancestry, settled there permanently -- including the poet's great-grandmother Amelia Campbell and her daughter, Ella -- and those the locals called the "jackytars," a derogatory epithet used to describe someone of mixed French and Mi'kmaq descent. Many remained there until the late 1970s, when the settlement was forcibly abandoned and largely forgotten.

Walbourne-Gough lyrically sifts through archival memory and family accounts, resurrecting story and conversation, to patch together a history of a people and place. Here he finds his own identity within the legacy of Crow Gulch and reminds those who have forgotten of a glaring omission in history.