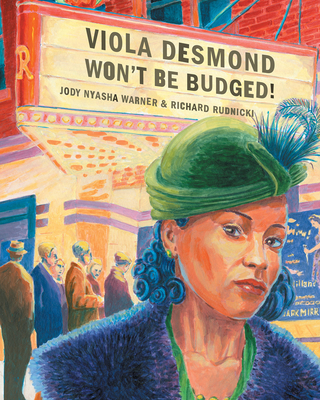 "On behalf of the Nova Scotia government, I sincerely apologize to Mrs. Viola Desmond's family and to all African Nova Scotians for the racial discrimination she was subjected to by the justice system ... We recognize today that the act for which Viola Desmond was arrested, was an act of courage, not an offence." -- Darrell Dexter, Premier of Nova Scotia, April 15, 2010

In Nova Scotia, in 1946, an usher in a movie theatre told Viola Desmond to move from her main floor seat up to the balcony. She refused to budge. Viola knew she was being asked to move because she was black. After all, she was the only black person downstairs. All the other black people were up in the balcony. In no time at all, the police arrived and took Viola to jail. The next day she was charged and fined, but she vowed to continue her struggle against such unfair rules. She refused to accept that being black meant she couldn't sit where she wanted.

Viola's determination gave strength and inspiration to her community at the time. She is an unsung hero of the North American struggle against injustice and racial discrimination whose story deserves to be widely known.

The African Canadian community in Nova Scotia is one of Canada's oldest and most established black communities. Despite their history and contributions to the province the people in this community have a long experience of racially based injustice.

Like Claudette Colvin and Rosa Parks, who many years later, in 1955, refused to give up their bus seats in Alabama, Desmond's act of refusal awakened people to the unacceptable nature of racism and began and process of bringing an end to racial segregation in Canada.

An afterword provides a glimpse of African Canadian history.