Why No Confederate Statues in Mexico (Paperback) 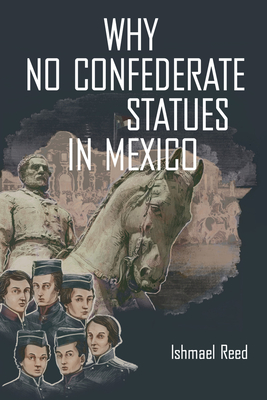 The War of Rebellion still divides the United States. Some rebel generals, whom the famous pro-confederate propaganda film “Gone With The Wind” referred to as “Knights,” earned their massacre bona fides by murdering thousands of blacks, Mexicans, and Native Americans. The “Knight” Robert E. Lee fought children during the Battle of Buena Vista in 1847. The children, Los niños heroes, refused to surrender and were slaughtered. The subjects addressed in this book include white nationalism, Donald Trump, Quentin Tarantino and Django, the musical Hamilton, Ferguson, Missouri, Amiri Baraka, a different take on #metoo, the one-at-a-time tokenism of an elite, who chooses winners and losers among minority artists, the Alt-Right, the use of immigrants to shame black America, and much more.

Ishmael Reed is a poet, novelist, essayist, illustrator, songwriter, and Jazz pianist. He is a professor at both The University of California at Berkeley and the California College of the Arts.

""Ishmael Reed is the purest literary troublemaker we currently have... a book that is arresting... always-bracing and readable." —Jeff Simon, Buffalo News

"One of 12 top books of 2019: Ishmael Reed builds on the theme of resisting white supremacy through the power of multi-racial coalitions with pugilistic essays that pull no punches.... His essay "White Nationalism's Last Stand" is so hopeful that it's worth the price of the ticket alone." —Michael Berry and D. Scot Miller, East Bay Express

"Since the mid-twentieth century, Ishmael Reed has been deep, abrasive, and didactic, an iconoclastic champion of what is "good" and a formidable critic of what is "bad" in domestic and transnational affairs. Reed is a fighter, a battered but undefeated fighter. Why No Confederate Statues in Mexico is a compelling record of his place in literary histories and moral struggles. It is a feast one consumes with grains of pepper and salt." —Jerry W Ward, Jr, New World Review