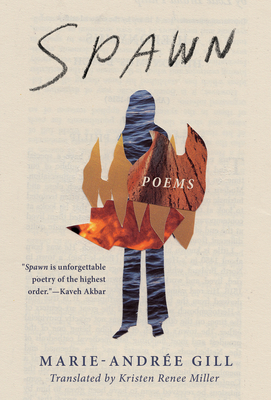 Spawn is a braided collection of brief, untitled poems, a coming-of-age lyric set in the Mashteuiatsh Reserve on the shores of Lake Piekuakami (Saint-Jean) in Quebec. Undeniably political, Gill's poems ask: How can one reclaim a narrative that has been confiscated and distorted by colonizers?

The poet's young avatar reaches new levels on Nintendo, stays up too late online, wakes to her period on class photo day, and carves her lovers' names into every surface imaginable. Encompassing twenty-first-century imperialism, coercive assimilation, and 90s-kid culture, the collection is threaded with the speaker's desires, her searching: for fresh water to "take the edge off," for a "habitable word," for sex. For her "true north"—her voice and her identity.

Like the life cycle of the ouananiche that frames this collection, the speaker's journey is cyclical; immersed in teenage moments of confusion and life on the reserve, she retraces her scars to let in what light she can, and perhaps in the end discover what to "make of herself".

"Spawn is an epic journey that follows the ouananiche in their steadfast ability to hold: rigid, shimmering, hardened to the frigid waters of winter, in all of its capacities of and for whiteness. Here, poems summon a spawn of wonderworking dreams: 'a woman risen up from all these winter worlds, heaped with ice [and] ready to start again'." —Joshua Whitehead, author of Jonny Appleseed

"Spawn is unforgettable poetry of the highest order." —Kaveh Akbar, author of Calling a Wolf a Wolf

Ilnu Nation member Marie-Andrée Gill grew up on the Mashteuiatsh reserve in the Saguenay region in Quebec, home to the Pekuakamishkueu community. She is the acclaimed author of three French-language poetry collections from La Peuplade: Béante, Frayer, and Chauffer le dehors. Two of her books have been translated into English by Kristen Renee Miller, including Spawn (2020) and Heating the Outdoors (forthcoming in 2023). A doctoral student in literature, Gill's research and creative work focus on the decolonial project of writing the intimate. She hosts the award-winning Radio-Canada podcast "Laissez-nous raconter: L'histoire crochie" (Telling Our Twisted Histories), which "reclaims Indigenous history by exploring words whose meanings have been twisted by centuries of colonization." Gill's work has been nominated for many awards, including the Governor General's Literary Award for Poetry, and she is a two-time recipient of the Salon du Livre Prize in Poetry. She has also won two Indigenous Voices Awards, including the Best Published Poetry in French prize for Chauffer le dehors. Also in 2020, Gill was named Artist of the Year by the Quebec Council of Arts and Letters.

Kristen Renee Miller is the incoming Executive Director and Editor-in-Chief of Sarabande Books. A poet and translator, she is the 2020 winner of the Gulf Coast Prize in Translation and the translator of two books from the French by poet Marie-Andrée Gill: Spawn (2020) and Heating the Outdoors (forthcoming in 2023). Her work can be found widely, including in POETRY Magazine, The Kenyon Review, DIAGRAM, jubilat, and Best New Poets. She is the recipient of fellowships and awards from the Foundation for Contemporary Arts, the John F. Kennedy Center for the Performing Arts, and the American Literary Translators Association. She lives in Louisville, Kentucky.