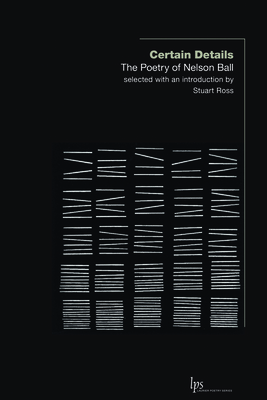 Nelson Ball has had a significant impact on contemporary Canadian poetry not only as a poet but as an editor, with his Weed/Flower Press in the 1960s and 70s. Certain Details provides a major overview of the breadth and many paths of Ball's poetry over six decades. This selection of his work includes his trademark minimalist poems in addition to longer works and sequences; it spans nature poems, homages, meditations, narratives, found poems, and visual poems. The book contains selections from all of Ball's major collections as well as works that have previously appeared only in chapbook or ephemeral form.

In a generous and thoughtful afterword, and for the first time in print, Ball discusses his processes, influences, and aesthetics. The book is introduced by editor and poet Stuart Ross, who offers a personal entry point into Nelson Ball's extraordinary oeuvre.