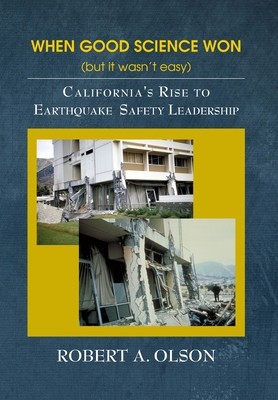 There ought to be a law How many times have we said and heard this desire? From his extensive experience with crafting, advocating, and implementing many of California's earthquake safety laws, author Robert A. Olson takes the reader into the process by answering the critical question: How are earthquake safety requirements conceived and made into laws?

To illustrate the process, he draws upon history to show how the policy stage was set immediately after the 1933 Long Beach earthquake when two precedent-setting measures were enacted: the "Field Act" that centralized at the state level the planning, design, and construction of public schools, and the "Riley Act" that set a minimum standard for constructing buildings in general. Olson also draws on other events, such as the 1925 Santa Barbara earthquake and the non-earthquake caused Saint Francis Dam failure of 1928, and the steady mobilization of advocacy groups, to add a broader context of how the San Fernando earthquake of 1971 prompted a special joint legislative committee to sponsor noteworthy laws.

The politics of enacting state laws soon after the 1971 San Fernando earthquake include requiring local general plans to address earthquake safety, stipulating rigorous state standards for construction of new hospitals, and calling for establishment of a Seismic Safety Commission.

From his view as a political scientist, Olson defines four "waves" that characterize California's earthquake safety evolution. Wave One addresses the early disasters and the two laws stemming from the Long Beach earthquake. Wave Two focuses only on the legislative consequences of the 1971 San Fernando earthquake. For Waves Three and Four Olson summarizes legislative efforts following the 1989 Loma Prieta and 1994 Northridge earthquakes.

This fascinating book is as much about historic earthquakes as it is about legislative politics: the process that every proposed California law undergoes from idea to law (or rejection). The bills that were passed into law are testaments to the earnestness and diligence of lawmakers, volunteer advocates and staffers whose desire was to protect the people of California.