Building the Brooklyn Bridge, 1869-1883: An Illustrated History, with Images in 3D (Hardcover) 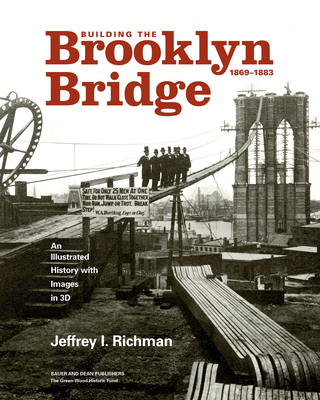 "If you love Brooklyn or bridges or New York City or cities or 19th century marvels--or all of the above, as I do--Building the Brooklyn Bridge is a perfect feast, a would-be time-traveler's delight, overflowing with rare and evocative and fascinating images. It's a terrific book."--Kurt AndersenThis is the captivating story of how the Brooklyn Bridge--a structure of unprecedented size and technology--was built during an age of remarkable innovation.Spanning the East River, the bridge connected for the first time the then independent cities of Brooklyn and New York. People could now travel high above one of the busiest waterways in the world, journeying across by foot, horse-drawn carriage, or railway as they took in the magnificent views. This awe-inspiring structure was not only a modern engineering feat of extraordinary imagination, fortitude, and skill, it also was a towering beacon of human triumph.Author Jeffrey Richman has gathered 253 superb nineteenth-century images, many never before published on the printed page, including engineering drawings, photographs, stereographs (seen in 3D using a viewer), woodcuts, and colored lithographs. He also specially created several anaglyphs--3D images generated from stereographs--offering the reader the sensation of being at the construction site as the towers begin to rise. A born storyteller, Richman relates how a small group of dedicated engineers and thousands of workers toiled for more than a decade to construct what was then the largest suspension bridge ever built, section by section, from the massive anchorages and elegant towers to the cables and bridge railway (operational four months after the bridge's official opening). He reminds us how profoundly modern and groundbreaking the bridge was, in its use of steel (a new material) and pioneering construction methods. This book invites the reader to step back in time to discover why this iconic bridge--proclaimed the 'eighth wonder of the world' soon after its completion and a National Historic Landmark in 1964--continues to hold such a special place in the hearts of so many.A pair of 3D glasses are included with every copy of the book.

Jeffrey I. Richman has been fascinated by New York City's history for as long as he can remember. In 2007, after 33 years practicing law, representing indigent criminal defendants, he became the full-time historian at Brooklyn's Green-Wood Cemetery. Since then, he has led Green-Wood's Civil War, World War I, and World War II projects which, with the help of hundreds of volunteers, have identified, written, and posted online biographies for thousands of veterans interred there. He blogs about Green-Wood and his latest discoveries and is the author of three books, including Brooklyn's Green-Wood Cemetery: New York's Buried Treasure (1998). He has also co-designed two Green-Wood maps and curated several gallery exhibitions, including three on the Civil War and one on Coney Island. Driven by his passion for history and a long-standing fascination with 19th century New York, Richman is an avid collector who has amassed a notable collection of stereoview and lantern slide photographs of New York City, including many of the Brooklyn Bridge under construction which he has donated to The Green-Wood Historic Fund. One of his fondest memories is of attending the 100th anniversary of the bridge's opening in 1983 - just one milestone in his love affair with the Brooklyn Bridge.