Literature: What Every Catholic Should Know (Paperback) 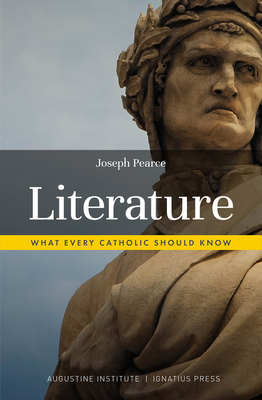 The new What Every Catholic Should Know series is intended for the average faithful Catholic who wants to know more about Catholic faith and culture. The authors in this series take a panoramic approach to the topic of each book aimed at a non-specialist but enthusiastic readership. Forthcoming titles planned for this series include: literature, salvation, mercy, history, art, music and philosophy.

In Literature: What Every Catholic Should Know, Joseph Pearce provides a survey of literary works of which all Catholics should be aware. Beginning with Homer and Virgil, the book progresses chronologically through the greatest works of all time, including Dante, Chaucer, Shakespeare, Jane Austen, Dickens, Chesterton, Eliot, Tolkien and Lewis.

Joseph Pearce is the author of numerous literary works including Literary Converts, The Quest for Shakespeare and Shakespeare on Love, and the editor of the Ignatius Critical Editions series. His other books include literary biographies of Oscar Wilde, J.R.R. Tolkien, C. S. Lewis, G. K. Chesterton and Alexander Solzhenitsyn.