Freeing Energy: How Innovators Are Using Local-scale Solar and Batteries to Disrupt the Global Energy Industry from the Outside In (Hardcover) 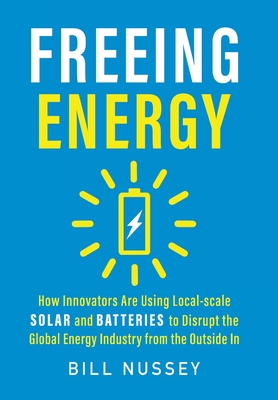 The transition to clean energy is moving far too slowly. Trapped by a century of fossil fuel investments and politicians that struggle to plan beyond the next election, the "Big Grid" that powers our modern world is outdated and in dire need of an upgrade. Freeing Energy offers a new and faster path towards a clean energy future-one that is more reliable, more equitable, and cheaper. Just like personal computers eclipsed mainframes, millions of solar rooftops and small battery systems are challenging every assumption about our century-old, centralized electric grid. These small-scale "local energy" systems are deeply disruptive because they are based on fast-moving technologies, not fuels. Driven by a new generation of innovators and genuinely competitive markets, smaller systems are faster to build, easier to finance, cleaner to operate, and they create far more jobs than large-scale projects.

Bill Nussey takes readers to mud huts in Africa, an off-grid farm in California, and a rural school in the mountains of Puerto Rico to uncover the underlying patterns of technology and the business model innovations of the local energy revolution. He shares stories and insights from some of the industry's brightest visionaries and from leaders of the most cutting-edge startups, bringing it all together into an actionable framework to help accelerate this transition.

Freeing Energy is a deeply researched, actionable guide for anyone that cares about the future of energy-from startups, policymakers, investors, and utility leaders to the families and communities that want cleaner, cheaper energy today.

The clean energy transition is the single biggest economic opportunity in history-bigger than the industrial revolution and bigger than the computing revolution. Nussey's broad coverage of systems large and small, as well as different geographies around the world, brings the whole situation into perfect perspective to drive both optimism and action.

Nussey is spot on about the economic opportunity that comes with the shift to renewable energy, with a compelling angle about the role of local energy and action each of us can take. The clean energy transition is accelerating faster and further than most models predicted, and this book is a useful and timely read for anyone who wants to be part of it.

Nussey has grasped a fundamental truth about the transition to a zero-carbon economy: energy is no longer about capturing and exploiting resources, it's about technology, speed, innovation, and agility.

Freeing Energy, an inspiring and practical guide for enacting an energy revolution is a must read for aspiring entrepreneurs and anyone that wants to understand how technologies and innovators are upending systems to improve the lives of some of the world's most vulnerable people.

--- Jacqueline Novogratz, CEO and Founder of Acumen, and author of Manifesto for a Moral Revolution

Freeing Energy is one of the most encouraging and inspiring books I've read in years. Nussey is comprehensive and convincing in his portrayal of the relentless technological innovation driving down costs for small-scale solar and battery solutions, and the ability of these systems to improve energy and social equity in the US and around the world.