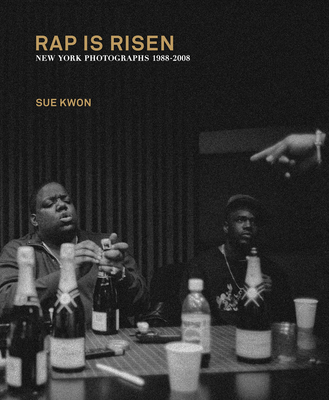 "Sue Kwon's undeniable hip-hop r sum should be bowed down to Sue is definitely one of the greats in visually capturing a culture." -Posdnuos of De La Soul

The last decade of the 20th century into the first decade of the 21st represent a High Renaissance age of hip hop--an era in which rap music had reached critical mass and was exploding, and in which New York City itself witnessed the worldwide ascension and cultural domination of its powerful homegrown art form. In Rap Is Risen: New York Photographs 1988-2008, celebrated photographer Sue Kwon documents this era with a combination of incisive portraits and unposed, spontaneous images that capture the energy of these ascendant artists and the city itself.
With access to some of rap music's biggest legends--some stars already, some at the cusp of their fame--Kwon's work offers an intimacy rarely seen in the hip hop photography of the time. The Wu-Tang Clan, Biggie Smalls, Jay-Z, Kanye West, Big Pun, Eminem, Mobb Deep, the Beastie Boys, Big L, Ice Cube, De La Soul and A Tribe Called Quest are all represented here, as well as dozens of other DJs and artists that communed with Kwon to produce these images. Method Man brushing his teeth, Fat Joe playing softball in the Bronx, Prince Paul kissing his baby son--the trust inherent between subject and photographer is evident in intimate, joyful shots like these.
Giving a rare glimpse into real rap culture, and featuring 300 photographs, most of which have never been published before, Rap Is Risen is a necessary offering to music history and the faithful followers of hip hop.
Sue Kwon began her career at the Village Voice and went on to shoot primarily hip hop artists for record labels such as Def Jam, Sony and Loud Records. Recent commercial collaborations include MCM, Sergio Tacchini and Carhartt WIP national campaigns.