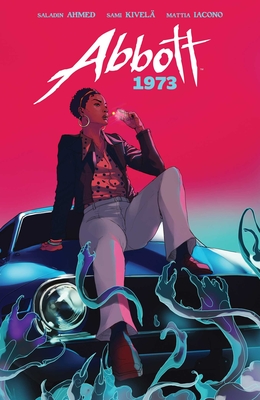 By Saladin Ahmed, Sami Kivelä (Illustrator)
$17.99
Unavailable, Out of Stock, or Out of Print

Elena Abbott is one of Detroit’s toughest reporters, who must now exhaust all her abilities as a reporter and a supernatural savior to rescue Detroit from dark forces trying to corrupt the city’s most important election—but at what cost to her own life?

A WAR FOR THE SOUL OF DETROIT. Elena Abbott is one of Detroit’s toughest reporters—and after defeating the dark forces that murdered her husband, she’s focused on the most important election in the city’s history. But when someone uses dark magic to sabotage the campaign of the prospective first Black mayor of Detroit, it becomes clear to Abbott that the supernatural conspiracy in her city is even greater than she ever imagined. Now Abbott must exhaust all her abilities as a reporter and a supernatural savior to rescue Detroit—but at what cost to her own life? Miles Morales: Spider-Man mastermind & Eisner Award-winning writer Saladin Ahmed and acclaimed Machine Gun Wizards artist Sami Kivelä return to the Hugo Award-nominated world of Abbott, as the eponymous unstoppable reporter tackles a new corruption taking over Detroit in 1973 and the supernatural threat behind it. Collects Abbott: 1973 #1-5.

Saladin Ahmed (born October 4, 1975) is an Eisner Award winning American comic book and science fiction and fantasy writer. His 2012 book Throne of the Crescent Moon was nominated for the Hugo Award for Best Novel and won the Locus Award for Best First Novel. He has also been a finalist for the John W. Campbell Award, the Nebula Award for Best Novel and the Nebula Award for Best Short Story. Ahmed's fiction has been published in anthologies and magazines including Strange Horizons, Orson Scott Card's InterGalactic Medicine Show, Clockwork Phoenix 2 and Beneath Ceaseless Skies. He is also the writer of Black Bolt, Exiles and Miles Morales: Spider-Man from Marvel Comics.