A Strange and Beautiful Sound (Hardcover) 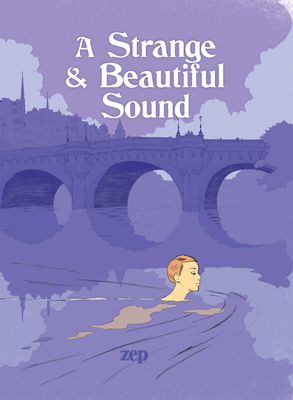 Where is life's value? In the noise and fury, or in the silence and contemplation? In the struggles or in the peace?

William chose silence 25 years ago when he joined the Carthusian religious order. But when an inheritance requires his presence in Paris he returns to a new world, full of questions he stopped asking long ago. There, a chance meeting with a determined woman and her unique beliefs force William to contemplate the inner peace he so resolutely seeks. Presenting the second English language release from international illustration sensation ZEP.

Born in 1967 in Switzerland, Zep--his real name is Philippe Chappuis--derives his pen name from a fanzine that he created at age 12 when he was a fan of Led Zeppelin. Drawing and inventing stories from a tender age, he later enrolled in the Ecole des Arts Décoratifs in Geneva. In 1992, Zep laid down some of his childhood memories in a sketchbook, an act giving birth to the character Titeuf who would become the best-known little boy in French comics. Today, Titeuf (translated in English as "Tootuff") has become a publishing phenomenon, popular amongst children and their parents, with 13 books published and printed in millions of copies, and a cartoon series broadcast since 2001 in 240 countries and in 35 languages. He is eminently the author of Le Guide du zizi sexuel (text by Hélène Bruller), a humorous practical guide on sexuality for children and their parents, now a must-have for families (2 million copies sold). In 2007, the Cité des Sciences et de l'Industrie in Paris inaugurated an exhibition adapting Le Guide du zizi sexuel that attracted record-breaking crowds (350,000 visitors) before travelling to Switzerland and Belgium. In 2004, Zep won the Grand Prix d'Angoulême for his body of work. This is the most prestigious prize for European comic book writers.

"Respectable, beautiful, and deserves to have a place on your shelf." –Fanbase Press