In Search of Mary Shelley: The Girl Who Wrote Frankenstein (Hardcover) 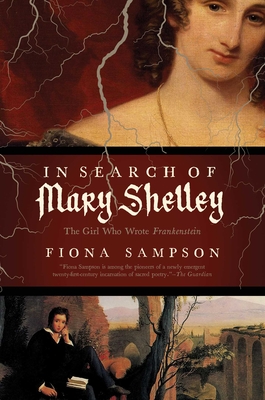 By Fiona Sampson
$28.95
Unavailable, Out of Stock, or Out of Print

Coinciding with the 200th anniversary of the publication of Frankenstein in 1818, a prize-winning poet delivers a major new biography of Mary Shelley?as she has never been seen before.


We know the facts of Mary Shelley’s life in some detail—the death of her mother, Mary Wollstonecraft, within days of her birth; the upbringing in the house of her father, William Godwin, in a house full of radical thinkers, poets, philosophers, and writers; her elopement, at the age of seventeen, with Percy Shelley; the years of peripatetic travel across Europe that followed. But there has been no literary biography written this century, and previous books have ignored the real person—what she actually thought and felt and why she did what she did—despite the fact that Mary and her group of second-generation Romantics were extremely interested in the psychological aspect of life.

In this probing narrative, Fiona Sampson pursues Mary Shelley through her turbulent life, much as Victor Frankenstein tracked his monster across the arctic wastes. Sampson has written a book that finally answers the question of how it was that a nineteen-year-old came to write a novel so dark, mysterious, anguished, and psychologically astute that it continues to resonate two centuries later. No previous biographer has ever truly considered this question, let alone answered it.

Fiona Sampson is a poet who has been shortlisted twice for the T.S. Eliot Prize and the Forward Prize. She has received the Cholmondeley Award, the Newdigate Prize, and the Writer's Award from the Arts Councils of England and of Wales, and is a Fellow of the Royal Society of Literature, a Fellow of the Royal Society of Arts, and a Trustee of the Wordsworth Trust. Please visit her at www.fionasampson.co.uk.

"Even for those of us who thought we knew everything about the young author of Frankenstein, Fiona Sampson’s brilliant new biography has many surprises in store. The ground on which [Shelley] stands, the very apartments in which she lived, are freshly illuminated, newly imagined, helping us draw closer to this fascinating but elusive writer.This is not so different a project from Mary Shelley’s own: to breathe life into the dead, to bring new life to the archives of the past."
— Washington Post

"British poet and academic Fiona Sampson’s new study In Search of Mary Shelley focuses almost exclusively on her subject's youth. She wants to tell us about what she calls the ‘chewy’ bits—the sex scandals, the haunted nights in Swiss villas, the Sturm und Drang. And she does it in a way that is unapologetically selective, giving us her Mary in a series of "freeze frames" or tableaux: biography by lightning flashes. If you are after bravura scene-setting, however, and an ardent inhabiting of the book's subject, Ms. Sampson can't be bettered. Ms. Sampson throws herself wholeheartedly into satisfying our curiosity about the psychological triggers behind Frankenstein."
— Wall Street Journal

"Mary's life has unending fascination. [Sampson's] goal is to 'bring Mary closer to us.' She sees Mary's turbulent life in the context of the Romantic Movement, and as part of an early wave of feminism that ended in the conservative Victorian era."
— New York Times Book Review

"Mary’s life is recounted with insight and and empathy by Fiona Sampson’s In Search of Mary Shelley the most engaging of a clutch of books published to mark the novel’s bicentenary."
— The Economist

"Plumbing her formative years as well as the depths of her psyche for clues, Sampson chronicles the circumstances and events that preceded her subject’s extraordinarily imaginative leap into new literary horizons. [A] fascinating story of the inner workings and motivations of a genius well ahead of her time on the 200th anniversary of her masterpiece."
— Booklist (starred)

"A perceptive biography. Sampson demonstrates why the story of Shelley and Frankenstein remains so intriguing, even today. The author deftly plumbs the depths of Mary's psyche to enlighten us about both Shelleys and reveal the profound effects they had on each other."
— Kirkus Reviews

"An incisive and emotionally resonant portrait of Mary Shelley. Succeeds in bringing an unconventional woman to vivid life."
— Publishers Weekly

"Sampson focuses on key episodes that provide essential clues to understanding the author. Each episode is like a tile in a mosaic, beautifully crafted and essential to Shelley’s complex portrait. Or, given Sampson’s status as one of England’s pre-eminent living poets, perhaps it is more apt to say that each chapter is like a stanza, resulting in a poetic exploration of one of the most influential novelists in English literature. Illuminates a woman whose genius enabled her not only to survive but also to triumph."
— BookPage