Memories of Starobielsk: Essays Between Art and History (Paperback) 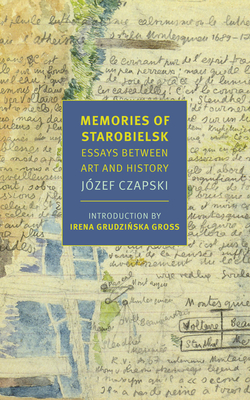 Vivid accounts of life in a Soviet prison camp by the author of Inhuman Land.

Interned with thousands of Polish officers in the Soviet prisoner-of-war camp at Starobielsk in September 1939, Józef Czapski was one of a very small number to survive the massacre in the forest of Katyń in April 1940. Memories of Starobielsk portrays these doomed men, some with the detail of a finished portrait, others in vivid sketches that mingle intimacy with respect, as Czapski describes their struggle to remain human under hopeless circumstances. Essays on art, history, and literature complement the memoir, showing Czapski’s lifelong engagement with Russian culture. The short pieces on painting that he wrote while on a train traveling from Moscow to the Second Polish Army’s strategic base in Central Asia stand among his most lyrical and insightful reflections on art.

Józef Czapski (1896–1993) was a writer and artist, as well as an officer in the Polish army. NYRB Classics publishes his work of reportage about the Katyn Massacre, Inhuman Land, and a collection of his lectures on Proust during his time as a prisoner of war in a Soviet prison camp, Lost Time. New York Review Books also publishes Eric Karpeles’s biography of Czapski, Almost Nothing.

Alissa Valles is the author of the poetry collection Hospitium. Her translations include Zbigniew Herbert’s Collected Poems and Collected Prose and Ryszard Krynicki’s Our Life Grows (NYRB Poets). She lives in Cambridge, Massachusetts.

Irena Grudzińska Gross’s books include Czesław Miłosz and Joseph Brodsky: Fellowship of Poets and The Scar of Revolution: Tocqueville, Custine, and the Romantic Imagination. She lives in Brooklyn, New York.

“What distinguishes Memories of Starobielsk and deepens our understanding of the events Czapski lived through is the vision he imparts of a Europe that the Soviets (and the Nazis) had attempted to destroy. . . . Memories of Starobielsk shows the victims not as soldiers but as doctors, professors, engineers, writers, translators—people of education and character, products of a civilization that Stalinism could not accommodate.” —Philip Ó. Ceallaigh, The Los Angeles Review of Books

“Józef Czapski was a beautiful human being, courageous, noble but also hardworking; occasionally a soldier, journalist, diarist, always writing, drawing, always with a sketchbook in hand, always ready to help friends and strangers. In his person high intelligence and remarkable artistic talent met with an active, almost naive goodness—a rather rare combination, as we know” —Adam Zagajewski