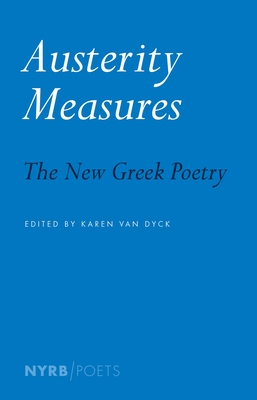 A remarkable collection of poetic voices from contemporary Greece, Austerity Measures is a one-of-a-kind window into the creative energy that has arisen from the country's decade of crisis and a glimpse into what it is like to be Greek today.

The 2008 debt crisis shook Greece to the core and went on to shake the world. More recently, Greece has become one of the main channels into Europe for refugees from poverty and war. Greece stands at the center of today’s most intractable conflicts, and this situation has led to a truly extraordinary efflorescence of innovative and powerfully moving Greek poetry. Karen Van Dyck’s wide-ranging bilingual anthology—which covers the whole contemporary Greek poetry scene, from literary poets to poets of the spoken word to poets online, and more—offers an unequaled sampling of some of the richest and most exciting poetry of our time.

Karen Van Dyck is the Kimon A. Doukas Professor of Modern Greek Literature in the Classics Department at Columbia University. She writes on modern Greek and Greek diaspora literature, and gender and translation theory. Her translations include her edited and co-edited collections: The Rehearsal of Misunderstanding: Three Collections by Contemporary Greek Women Poets; A Century of Greek Poetry; The Scattered Papers of Penelope: New and Selected Poems by Katerina Anghelaki-Rooke, a Lannan Translation selection; and The Greek Poets: Homer to the Present.

"The poets in [Austerity Measures] are young, most of them under forty, but they inherit a rich Greek tradition of writers who seize a position in public discourse….Poets may need to find new ways to remain attuned to enormous changes that no one can foresee completely. Austerity Measures offers some clues as to what might be carried forward and what might be left behind.” —David Wallace, The New Yorker Page-Turner

"Karen Van Dyck’s Austerity Measures is a timely trove of new Greek voices that reverberates with urgency and authority, girded with hard-earned truth and a deep seeing necessary for our twenty-first century. Here’s a language that goes for the gut and the heart, an earthy sonority. It holds us accountable for what we witness and feel in a time of globalism. This marvelous compendium of lived imagery speaks freely." —Yusef Komunyakaa

"Required reading for poetry fans and those interested in the toll of the economic crisis on the Greek people, and the abundant inspiration it is providing for artists and poets in particular." —Eleni Sakellis, The National Herald

“Greece, caught in a steely grip between Brussels in the north and refugees to the south, has produced a shape-shifting poetry that takes one to the heart of current lived experience. Beside the struggle for escape, the twisting and thrashing, there is a great melancholy too, as yet another generation attends its own funeral.” —Noonie Minogue, The Times Literary Supplement

"Austerity is a self-defeating economic policy which has taken an ugly toll in Greece. The silver lining is that, along with the mass unemployment and the rise of Nazism that it engendered, austerity also occasioned a cultural renaissance. This volume of multilingual poetry is a splendid example: living proof that the Greek crisis is of global significance. It deserves an international audience. Now!" —Yanis Varoufakis

"One of the few benefits of turbulent historical moments is that they tend to give rise to a new cultural efflorescence. Nowhere is this more obvious than in this fascinating anthology, which gathers together a remarkably rich, resourceful range of poetic idioms in response to a common sense of moral and political emergency." —Terry Eagleton

"Karen Van Dyck has collected an extraordinary group of poets and translators who are bound to put Greek poetry on the map again. I’ve seen it happen twice in my life: with the Generation of the Thirties that included Cavafy, Seferis, Elytes, and Ritsos, and that reached world recognition; and again, during the Dictatorship of the Colonels, when the group that appeared in the Harvard anthology Eighteen Texts (1972) and others living under censorship earned international recognition with the help of accomplished translators. Now, during another crisis in the country, we find exciting new voices emerging, and I am convinced that they are once again saying something no one else is saying. Call it the knowledge that emerges from the underside of devastation and the creative illumination that comes with tragedy, but something is going on in Greece that we aren’t seeing in the news. I give this anthology my strongest support." —Edmund Keeley

"It was no more than two or three poems in before I started to sense the book’s atmosphere, to see it as an uncommon chance to share Greek experience beyond the headlines—in a way that is fascinating, revelatory and only possible through poetry. Most poems here do not overtly address the crisis. But the collective spirit is new-minted, unmediated and bracing (the quality of translation high)." —Kate Kellaway, The Observer

"The light these poets work in, and the language they speak, are still the light and the language of Homer and the great tragedians. Austerity Measures, appearing as Greece faces new difficulties and suffering, offers a newly poignant, imaginative, and resonant body of work. The wonderfully inventive translations reveal a different Greece to English readers: one that does not cancel the past but builds upon it." —Ruth Padel