The Opposite of Here (Hardcover) 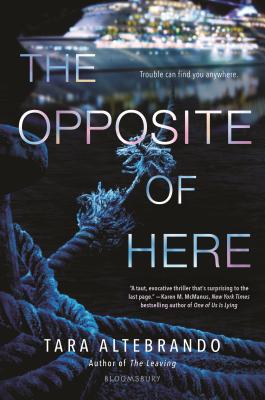 “A taut, evocative thriller that's surprising to the last page.”
--Karen M. McManus, New York Times bestselling author of One of Us Is Lying

There's no hiding on a cruise ship-not even from yourself.
Natalie's parents are taking her and her three best friends on a cruise for her seventeenth birthday. A sail-a-bration, they call it. But it's only been a few short months since Natalie's boyfriend died in a tragic accident, and she wants to be anywhere but here.
Then she meets a guy on the first night and sparks fly. After a moonlit conversation on a secluded deck of the ship, Natalie pops down to her cabin to get her swimsuit so they can go for a dip. But when she returns, he's gone. Something he said makes her think he might have . . . jumped? No, he couldn't have.
But why do her friends think she's crazy for wanting to make sure he's okay? Also, why do they seem to be hiding something from her? And how can she find him when she doesn't even know his name? Most importantly, why is the captain on the intercom announcing the urgent need for a headcount?
With her signature thrilling storytelling, the author of The Leaving and The Possible explores our vulnerability to the power of suggestion-and the lies we tell others and ourselves-in a twisting, Hitchcock-inspired mystery with high stakes and dark secrets.

Tara Altebrando is the author of several middle grade and teen novels, including The Possible and The Leaving. She lives in New York City with her family.
www.taraaltebrando.com
@TaraAltebrando

"Altebrando gives a nod to Alfred Hitchcock in this taut thriller . . . A fast-paced and complicated mystery filled with uncertainty and dread." - Publishers Weekly

"Once the mystery is introduced, by way of the twins’ Hitchcockian actions . . . readers will fly through to the final twist." - Booklist

"Will keep readers guessing until the very end. . . . A fun and unusual mystery that teens will enjoy; give to fans of John Green’s Paper Towns and E. Lockhart’s We Were Liars." - School Library Journal

"Worthy of the intertextual references to Hitchcock that thread through the novel." - BCCB

"A taut, evocative thriller that's surprising to the last page." - Karen M. McManus, New York Times bestselling author of ONE OF US IS LYING

"The juicy premise is enough to draw mystery/crime fans, and Altebrando unspools details with a deft hand." - BCCB on THE POSSIBLE

"This gripping tale, full of unexpected twists and turns, will intrigue readers who enjoy psychological thrillers with a touch of the paranormal." - School Library Journal on THE POSSIBLE

"You will not sleep, check your phone or even breathe once you begin reading The Leaving. Altebrando hides a meditation on memory and identity inside a top-speed page-turner. I promise, you will not even look up from the page." - E. Lockhart, author of WE WERE LIARS on THE LEAVING

"A twisting, harrowing story . . . Engrossing, both as a thriller and a meditation on memory--its limits, its loss, and the ways it deceives and constructs identity." - starred review, Publishers Weekly on THE LEAVING

"This is no mere thriller; folded into this compulsively readable work are thought-provoking themes. . . . Teens who enjoy engrossing, contemplative titles such as Adam Silvera’s More Happy Than Not will devour this insightful musing on memory and identity." - starred review, School Library Journal on THE LEAVING

"As heart-stopping as it is heart-breaking, The Leaving layers a wildly strange suspense story over a lovely and unexpected narrative of grief, loss, and the struggle to imagine a future in the shadow of the past." - Robin Wasserman, author of GIRLS ON FIRE on THE LEAVING

"This book gripped me on the first page, and by the last, had really moved me. It's a twisty, oh no she didn't thriller that keeps the surprises firing, but also a thoughtful meditation on memory, identity, and what really makes us who we are." - Bennett Madison, author of SEPTEMBER GIRLS on THE LEAVING

"We are rushed headlong into Altebrando’s The Leaving, and instantly we want to know: Who are these wildly intriguing teens? Where are their memories hiding? Who or what has engineered the disappearance of their childhood? Bold, inventive, and engaging, The Leaving leaps straight off the page." - Beth Kephardt, author of SMALL DAMAGES and THIS IS THE STORY OF YOU on THE LEAVING