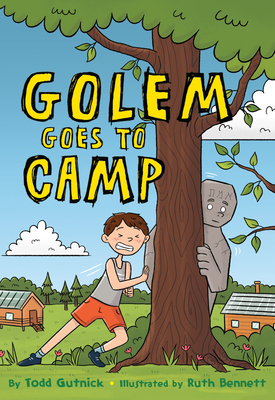 Emmett Cohen was not at all happy when his mom insisted that he try the art elective at camp this summer.

His parents and sister were arty, but he was not. He preferred skateboards and science and comic books. He was grumpy and more than a little homesick when he showed up at the art shack for his first session and started poking around for a project. He brightened when he found a trash can full of odd mud, and was soon engrossed in shaping a mini monster from the thick clay. At the end of the session, when he scratched his name in Hebrew on his project and left for a swim in the lake, he had no idea that the mud sculpture he had created was about to come to life.

For Emmett had unknowingly created a golem, a mystical, protective mud creature that lived in Jewish legends dating back to 16th century Poland. And here it was in the middle of Camp Teva, in Emmett's cabin.

Before long, the golem is getting into mischief and out of hand, and Emmett and his friends, now organized as a secret "Mud Pack" are trying to make sure no one finds out there is a real-life golem at camp.

Luckily, Camp Teva was an awesome set up for hiding a mud monster.

Join Emmett, his sister Emily, and his camp friends Jake, Danny, and Reisha, and the pesky twins Lilly and Rebecca as they embark on their most exciting summer ever, trying to keep one step ahead of an eager-to-please mud monster that has a hard time getting its instructions quite right.

A fun summer read for 7-9 year-olds with a mud monster that, like Amelia Bedelia, follows directions a bit too literally.