Stalin's Vengeance: The Final Truth about the Forced Return of Russians After World War II (Hardcover) 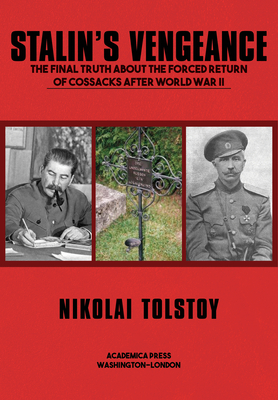 In May 1945, as World War II drew to a close in Europe, some 30,000 Russian Cossacks surrendered to British forces in Austria, believing they would be spared repatriation to the Soviet Union. The fate of those among them who were Soviet citizens had been sealed by the Yalta Agreement, signed by the Allied leaders a few months earlier. Ever since, mystery has surrounded Britain's decision to include among those returned to Stalin a substantial number of White Russians, who had fled their country after the Russian Revolution of 1917 and found refuge in various European countries. They had never been Soviet citizens, and should not have been handed over. Some were prominent tsarist generals, on whose handover the Soviets were particularly insistent. General Charles Keightley, the responsible British officer, concealed the presence of White Russians from his superiors, who had issued repeated orders stipulating that only Soviet nationals should be handed over, and even then only if they did not resist. Through a succession underhanded moves, Keightley secretly delivered up the leading Cossack commanders to the Soviets, while force of unparalleled brutality was employed to hand over thousands of Cossack men, women, and children to a ghastly fate. Particularly sinister was the role of the future British Prime Minister Harold Macmillan, whose own machinations are scrutinized here. Following the publication of Count Nikolai Tolstoy's last book on the subject in 1986, the British government closed ranks, and three years later an English court issued a 1,500,000 judgment against him for allegedly libeling the British chief of staff who issued the fatal orders. Since then, however, Count Tolstoy has gradually acquired a devastating body of heretofore unrevealed evidence filling the remaining gaps in this tragic history. Much of this material derives from long-sealed Soviet archives, to which Tolstoy received access by a special decree from the late Russian President Boris Yeltsin. What really happened during these murky events is now revealed for the first time.