The Utopian Conceit and the War on Freedom (Paperback) 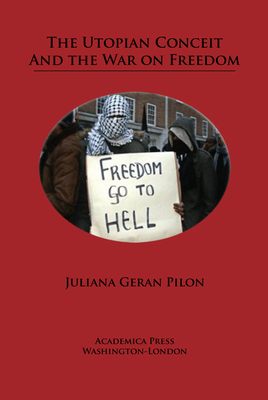 After the unexpected collapse of the Soviet Union, the categories of "Left" and "Right" continue to be used to describe political ideologies, despite their historic ambiguity and a shared utopian root. The idealistic belief that a perfect world is possible continues to dwell on existential hope for messianic salvation. This belief lay at the heart of the apocalyptic narratives of the Bible and reflects what the Greeks called hubris, a fatal and destructive form of conceit. This conceit reemerged in the Gnostic sects of early Christianity, then again in medieval millenarianism, Jacobinism, Marxism, Fascism, and secular "liberal" collectivism. Modern-day Salafi Islam is the latest manifestation in this nefarious tradition. In The Utopian Conceit and the War on Freedom, noted political philosopher Juliana Geran Pilon explores the roots of this malevolent ideology as the common ancestor of both anti-capitalism and anti-Semitism in the contemporary world, where political and religious freedom is increasingly under assault.

In an age of rampant religious and philosophical skepticism and national and ethnic deracination, religious and quasi-religious ideologies bent on the vilification and destruction of entire communities are confronting and undermining a confused, guilt-ridden, materialistic, and often nihilistic Western society. In this bold and dynamic book, Pilon argues that a strong defense of freedom and pluralism, which forms the basis of constitutional democracy, is essential for the survival of civilization. Culturally sensitive and empirically tested outreach, predicated on an uncompromising defense against disinformation and terror, must be waged by all civilized nations, but especially the United States as its role evolves in a changing world.