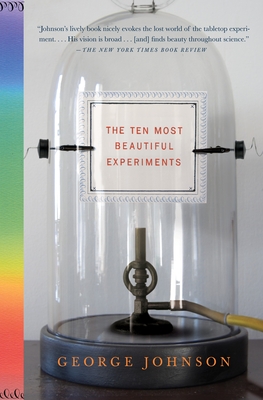 A dazzling, irresistible collection of the ten most groundbreaking and beautiful experiments in scientific history.

With the attention to detail of a historian and the storytelling ability of a novelist, New York Times science writer George Johnson celebrates these groundbreaking experiments and re-creates a time when the world seemed filled with mysterious forces and scientists were in awe of light, electricity, and the human body. Here, we see Galileo staring down gravity, Newton breaking apart light, and Pavlov studying his now famous dogs. This is science in its most creative, hands-on form, when ingenuity of the mind is the most useful tool in the lab and the rewards of a well-considered experiment are on exquisite display.

George Johnson writes regularly about science for The New York Times. He has also written for National Geographic, Slate, Discover, Scientific American, Wired, and The Atlantic, and his work has been included in The Best American Science Writing. A former Alicia Patterson fellow, he has received awards from PEN and the American Association for the Advancement of Science, and his books were twice finalists for the Royal Society's book prize. He lives in Santa Fe, New Mexico.