Hate the # 1 Social Behavioral Disease: The Prince of Principles (Paperback) 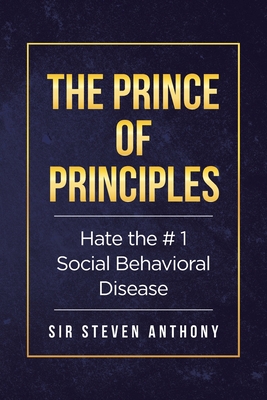 Boy meets girl. Steven is from the country club brought up with understanding reasoning, believing in facts, having a consciousness, and carrying a moral compass. Octapella lives in a trailer park and under her mother's standards, disbelieves, suffocating control tactics. Zoo controls all of Octapella's decision-makings. Zoo wants her children to be bad, thoughtless, and much as possible, uneducated with life, society, and not understand how the real world lives. Zoo's network of people she titles as family are all corrupted in the way they think, act, and believe. The more Steven tries to listen to Octapella, the more he wants to give Octapella a better life. However, Zoo continues to interfere, so Octapella, like a mermaid, keeps going back to her mother for advice, instead of her fiance.

The book resembles a reflection of the Cinderella story. Questions seem to unveil. Do we live in a society where evil is prevailing and becoming the ruler, the norm, and way of life? Do we have immature people in higher-up places of authority making decisions to the people and for the people?

This story unfolds. We can sweep off and brush away the dirt on society through detection by observation and then making awareness for other to adjust accordingly for the better. There is always room to make change for the better of the people. Steven and Octapella move in together. They practice together the steps and ceremony of marriage in church, however, never reach the point of marriage. As the same time, Steven practices for war and eventually goes off to war for five years in the deserts of Iraq. It is not Octapella who needs rescue from a knight in shining armor. It is their daughter, Santana Maria.

Worse, the presidential judge happens to have the same character of Zoo and Octapella, a social behavioral disease that carries internal deception, an intergenerational violent behavior of selfishness, hate, control, shaming, jealousy, and unjust. Therefore, a tease of unfairness just for their personal satisfaction. People like Judge Sorrow, Zoo and Octapella love the center of attention and being in charge only to spread more corruption in decision-making. They must have the final word, right or wrong. They despise when others are smarter, keen, happy, organized, correct, and content without drama. Judge Sorrow's technique in court is not to make a final decision. Even after fifteen years, Steven continues to ring more evidence, and the judge says she needs more evidence and in the meantime, gives Steven zero custody.

Like an undertow, families get separated because of a misrepresentation, heartbroken allegation, false promised arbitration, all from a malpracticed broken lopsided, slippery slope inconsiderate judge's sloppy, careless, and weak rulings.