Introduction to Greek Mythology for Kids: A Fun Collection of the Best Heroes, Monsters, and Gods in Greek Myth (Greek Myths ) (Paperback) 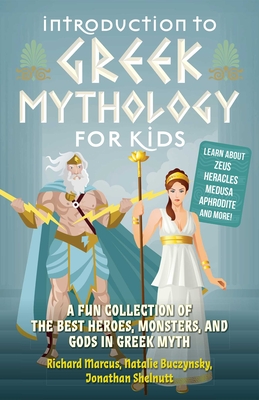 Discover the exciting and fascinating world of Greek and Roman gods, goddesses, monsters, and heroes, from Zeus and Athena to Hercules, Medusa, and more!

Take a journey through Mount Olympus, Ancient Greece, and Ancient Rome with this collection of the greatest tales found in Greek and Roman mythology. From origin stories to family drama, you’ll learn about the most powerful Olympic gods including Zeus, Hera, Poseidon, Athena, Apollo, Artemis, Aphrodite, Hades, and more. But this book has more than just gods and goddesses! You’ll also discover the dangerous and intriguing world of ancient monsters, fantastical creatures, and mortal heroes that populate some of the most awesome stories from the time, including:


All of these tales and more are written in a fun, kid-friendly manner, perfect for children interested in history or for fans of the Percy Jackson series.

Richard Marcus has previously written two books for Ulysses Press, What Will Happen In Eragon lV? and The Unofficial Heroes of Olympus Companion (being reissued). He has been a freelance arts critic since 2005 with his work appearing every where from the German edition of Rolling Stone to the Bangladesh Star newspaper. He currently edits the books section of the pop culture web magazine Blogcritics.org and is a monthly contributor to the web magazine Qantara.de published by German World Radio Service, Deutsche Welle.

Natalie Buczynsky is a history enthusiast currently living in the United States. She began her involvement with Ulysses Press in 2011 when they approached her about writing a guide to Grecco-Roman mythology. Since publication, Natalie has earned a bachelor's degree in psychology and a masters degree in neuroscience and had the privilege of expanding her worldview through travel to Tanzania, Ukraine, Scotland, Italy, and many more fascinating corners of the world. A student of people and places, Natalie has enjoyed writing about topics from ancient mythology to pioneering science of the 21st century and everything in between but the Greeks and Romans (and their food!) will always hold a special place in her world.