This Time the World (Paperback) 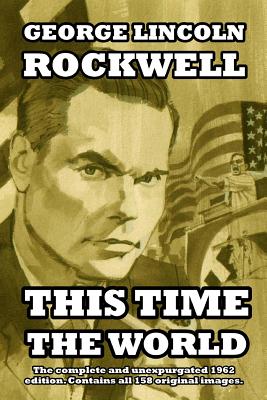 By George Lincoln Rockwell
$14.95
Unavailable, Out of Stock, or Out of Print

The explosive autobiography of the founder of the American Nazi Party, containing all 158 images and the full unedited text, taken directly from an original 1962 edition.
Rockwell describes his family background, his childhood, student days and his participation as a US Navy fighter pilot in World War II. It then moves on to describe his conversion to first conservatism and then into National Socialism, providing much of the evidence along the way which he found so convincing.
He describes his two marriages, and the ups and downs of his personal life leading up to the time in 1958, when, alone and without a penny to his name, he hoisted a swastika flag in his house in Arlington, Virginia, and announced the launch of the first openly National Socialist party in America since 1945.
In 1965, Rockwell polled 5,730 votes in a Virginia governor election, and in 1967 drew over 3,000 people to a public rally in Chicago. His increasing popularity frustrated opponents and it came as no surprise when he was gunned down just a few months after the publication of his second book, White Power.