I Embrace You with All My Revolutionary Fervor: Letters 1947-1967 (Hardcover) 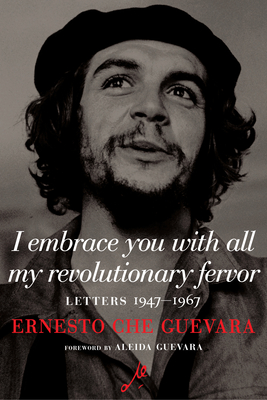 The first-ever edition of Che Guevara's letters, the vast majority never-before published in English in any form.

Ernesto Che Guevara was a voyager—and thus a letter writer—for his entire adult life. The letters collected in I Embrace You with All My Revolutionary Fervor: Letters 1947-1967 range from letters home during his Motorcycle Diaries trip, to the long letter to Fidel after the success of the Cuban revolution in early 1959 (from which the book's title comes), from the most personal to the intensely political, revealing someone who not only thought deeply about everything he encountered, but for whom the process of social transformation was a constant companion from his youth until shortly before his death. His letters give us Che the son, the friend, the lover, the guerrilla fighter, the political leader, the philosopher, the poet. Che in these letters is often playful, funny, sometimes sarcastic, and deeply affectionate. His life was short, and these twenty years, from when he was 19 until days before his death, show it was also incredibly rich and full.

As his daughter Aleida Guevara, also a doctor like her father, writes, "When you write a speech, you pay attention to the language, the punctuation and so on. But in a letter to a friend or a member of your family, you don't worry about those things. It is you speaking, in your authentic voice. That's what I like about these letters; they show who Che really was and how he thought. This is the true political testimony of my father."

Born in Rosario, Argentina, on June 14, 1928, and killed on October 9, 1967, the short life of Ernesto Guevara de la Serna is that of one of the greatest and most enduring revolutionary figures of all time, named one of Time magazine's "icons of the 20th century." He was politicized first-hand during his travels as a young man around Latin America, and especially by witnessing the CIA-backed overthrow of the elected government of Jacobo Árbenz in 1954 in Guatemala. He sought out a group of Cuban revolutionaries exiled in Mexico City. And, in July 1955, immediately after meeting their leader Fidel Castro, enlisted in their expedition to overthrow Cuban dictator Fulgencio Batista. The Cubans nicknamed him "Che," a popular form of address in Argentina.

"Arrogant, affectionate, and dogmatic, Guevara (1928–1967) is intimately revealed in this compilation of personal letters sent over the latter half of his extraordinary life. In the introduction, his daughter, Aleida Guevara, writes that unlike his meticulously planned fiery speeches, Che was more open in correspondence with friends and family. Spanning 20 years, these letters reflect that earnestness, following him from his teenage years to his impassioned farewells to those he left behind in Cuba just days before he was killed in 1967. He dutifully updates his mother on his health, teases a favorite aunt, and berates his wife, all while bearing a Zelig-like witness to the hemisphere’s defining political upheavals. His missives don’t mince words, either, especially when it comes to criticizing the government apparatus that followed the guerilla victory led by himself and Fidel Castro. In one letter—written just before he leaves Cuba in 1965 to fight for socialism in Africa—Che outlines to Castro the multiple problems he perceives with the state’s transition to socialism, surmising 'everyone involved in the management of the national economy... feels very disillusioned.' This offers a thrilling, eyewitness account of battles whose repercussions still reverberate today."
—Publishers Weekly