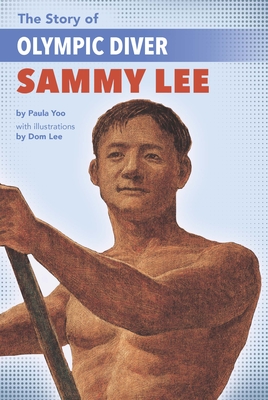 By Paula Yoo, Dom Lee (Illustrator)
$9.95
Unavailable, Out of Stock, or Out of Print

The Best Children's Books of the Year 2021 Edition

This compelling entry in the Story of line of chapter-book biographies features Sammy Lee, a Korean American diver who became the first Asian American to win an Olympic gold medal.

On a hot summer day in 1932, twelve-year-old Sammy Lee watched enviously as divers catapulted into the public swimming pool. Sammy desperately wanted to try diving himself, but the Korean American boy -- like any person of color -- was only allowed to use the pool one day a week.

This discrimination did not weaken Sammy's newfound passion for diving, and soon he began a struggle between his dream of becoming an Olympic champion and his father's wish for him to become a doctor. Over sixteen years Sammy faced numerous challenges, but he overcame them all and fulfilled both his dream and his father's. In 1948 Dr. Sammy Lee dove into Olympic history. A matter of seconds after his final platform dive, the scores appeared and Sammy Lee became the first Asian American to win an Olympic gold medal.

Sammy Lee's story of determination and triumph sets an extraordinary example for anyone striving to fulfill a dream and will inspire all who read it. This chapter book edition includes black-and-white illustrations as well as sidebars on related subjects, a timeline, a glossary, and recommended reading.

Paula Yoo is an author and screenwriter whose children's books for Lee & Low include Sixteen Years in Sixteen Seconds, Shining Star, and several titles in the Confetti Kids series. Her titles have been recognized by the International Reading Association, the Texas Bluebonnet Award Masterlist, and Lee & Low's New Voices Award. She and her husband live in Los Angeles, California, where she works in television. You can visit her online at paulayoo.com. Dom Lee made his picture-book debut with Baseball Saved Us. He grew up in Seoul, South Korea, and went on to illustrate books in both the United States and Korea. His titles for Lee & Low include Ken Mochizuki's Passage to Freedom and Heroes, as well as the award-winning Sixteen Years in Sixteen Seconds. Lee's unique illustration style involves applying encaustic beeswax on paper, then scratching out images, and finally coloring the images with oil paint. Lee and his wife live in Hollis, New York.