No Way to Treat a Child: How the Foster Care System, Family Courts, and Racial Activists Are Wrecking Young Lives (Hardcover) 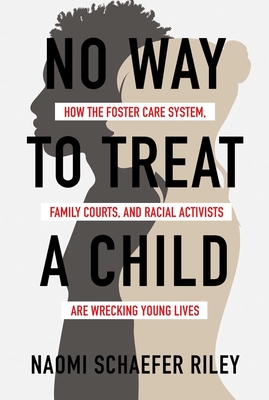 By Naomi Schaefer Riley
$28.00
Unavailable, Out of Stock, or Out of Print

The American child welfare system is bent toward protecting adults, not children.

Kids in danger are treated instrumentally to promote the rehabilitation of their parents, the welfare of their communities, and the social justice of their race and tribe—all with the inevitable result that their most precious developmental years are lost in bureaucratic and judicial red tape. It is time to stop letting efforts to fix the child welfare system get derailed by activists who are concerned with race-matching, blood ties, and the abstract demands of social justice, and start asking the most important question: Where are the emotionally and financially stable, loving, and permanent homes where these kids can thrive?

“Naomi Riley’s book reveals the extent to which abused and abandoned children are often injured by their government rescuers. It is a must-read for those seeking solutions to this national crisis.” —Robert L. Woodson, Sr., civil rights leader and president of the Woodson Center

Naomi Schaefer Riley is a resident fellow at the American Enterprise Institute focusing on issues regarding child welfare; a senior fellow at the Independent Women’s Forum; and a writer who examines parenting, higher education, religion, philanthropy, and culture.

She is a former columnist for the New York Post and has worked as a Wall Street Journal editor and writer. She is also the author of six books, including, Be the Parent, Please: Stop Banning Seesaws and Start Banning Snapchat.

Her book, Til Faith Do Us Part: How Interfaith Marriage is Transforming America, was named an editor’s pick by the New York Times Book Review.

Ms. Riley’s writings have appeared in the Wall Street Journal, the New York Times, the Boston Globe, the LA Times, and the Washington Post, among other publications. She appears regularly on Fox News, Fox Business, and CNBC. She has also appeared on Q&A with Brian Lamb as well as the Today Show.

"Naomi Schaefer Riley brings to the forefront a crucial question, which is foundational to the design of a compassionate and safe child welfare system in the United States. Her analysis and keen insights are more than worth a read. Her dedication and passion for this work continues to inspire me."
— Mary L. Landrieu, former U.S. Senator from Louisiana

"Naomi Schaefer Riley is one of the few people who will tell the truth about what really goes on in the lives of children who have been removed from their parents' care by the state. These children end up pawns in a great politically-motivated shuffle that often serves only to break their most important attachments; to leave them languishing for permanent placements until the 'right' kind of parent can be chosen by the state; or returned to dangerous situations. Sent from placement to placement—and school to school—they quickly suffer emotional and educational losses that can't be repaired. I don't know of any writer who reports as deeply and writes as honestly as NSR. At the very least, she bears witness to what we've all chosen to ignore. We all have a stake in this situation. Anyone who cares about the disappeared children of America should read this book."
— Caitlin Flanagan, staff writer, The Atlantic

"Harrowing yet full of heart, No Way to Treat a Child tells the searing tale of how political correctness is harming the smallest and weakest among us: kids who need homes. Kudos to Naomi Schaefer Riley for trying to change a system that needlessly puts young lives at risk. May her brave book succeed in its mission."
— Mary Eberstadt, author, "Primal Screams" and "How the West Really Lost God"

"Our beleaguered, blinkered child welfare system has not kept pact with the scientific consensus on healthy child development or the effect of trauma on the young brain. That huge numbers of children are harmed by the status quo is indisputable. The question is why we can't do better. With a journalist's eye for detail and a scientist's command of evidence, Riley describes how a system mired in forms of reckless idealism, disinformation, and bigotry has abandoned its mission to protect the most vulnerable members of our society. This is bracing, powerful stuff, and Riley is not interested in protecting naive feelings; but her provocative call to action should inspire decent people of all backgrounds , faiths, and identities to reform a disgraceful system and, perhaps, to live in closer alignment to the Talmudic saying that, 'Whoever saves one life saves the world entire.'"
— Erika Christakis, author, "The Importance of Being Little" and foster/adoptive parent

"Naomi Schaefer Riley's book reveals the extent to which abused and abandoned children are often injured by their government rescuers. It is a must read for those seeking solutions to this national crisis."
— Robert L. Woodson, Sr., civil rights leader and president of the Woodson Center

“We want the best for kids, especially the most vulnerable kids. But we aren’t getting even close, as Naomi Schaefer Riley masterfully and heartbreakingly shows in her gripping book No Way to Treat a Child. More than a tale of woe, however, this book shows the way to a better future for the people who are our future.”
— Arthur C. Brooks, professor, Harvard Kennedy School and Harvard Business School, and New York Times bestselling author

"Riley documents how America's failure to treat abused children as individuals with rights rather than property of parents, kin, race, or tribe, sends kids to their graves."
— Darcy Olsen, founder, Gen Justice

“The child-welfare system must be reoriented, as Riley rightly states, to put the needs of children first. Until then, the mistreatment will continue.”
— The Washington Free Beacon

“[Naomi Schaefer Riley] uses examples, data,and quotes from experts to show in heartbreaking detail how policymakers from the left and the right have converged in creating a child welfare system that puts adults first.... I certainly hope that policymakers on both sides of the aisle read and learn from this important book.”
— Child Welfare Monitor

“Riley issues a challenge that should motivate the rest of us.”
— National Review

“A call to face the reality that children are being victimized by radical cultural trends and bureaucratic incompetence....Riley’s laser-like focus on the state of child welfare in America has made her a leading expert on what’s wrong and what works.”
— Kathryn Jean Lopez in National Review