America's Revolutionary Mind: A Moral History of the American Revolution and the Declaration That Defined It (Hardcover) 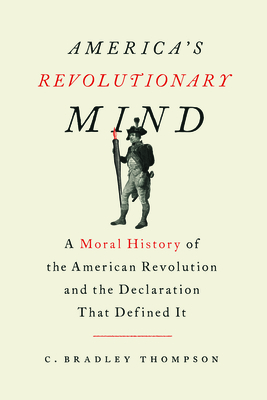 America's Revolutionary Mind is the first major reinterpretation of the American Revolution since the publication of Bernard Bailyn's The Ideological Origins of the American Revolution and Gordon S. Wood's The Creation of the American Republic. The purpose of this book is twofold: first, to elucidate the logic, principles, and significance of the Declaration of Independence as the embodiment of the American mind; and, second, to shed light on what John Adams once called the real American Revolution; that is, the moral revolution that occurred in the minds of the people in the fifteen years before 1776. The Declaration is used here as an ideological road map by which to chart the intellectual and moral terrain traveled by American Revolutionaries as they searched for new moral principles to deal with the changed political circumstances of the 1760s and early 1770s. This volume identifies and analyzes the modes of reasoning, the patterns of thought, and the new moral and political principles that served American Revolutionaries first in their intellectual battle with Great Britain before 1776 and then in their attempt to create new Revolutionary societies after 1776. The book reconstructs what amounts to a near-unified system of thought--what Thomas Jefferson called an "American mind" or what I call "America's Revolutionary mind." This American mind was, I argue, united in its fealty to a common philosophy that was expressed in the Declaration and launched with the words, "We hold these truths to be self-evident.

C. Bradley Thompson is Professor of Political Philosophy at Clemson University and the Executive Director of the Clemson Institute for the Study of Capitalism. He received his Ph.D at Brown University, and he has also been a visiting scholar at Princeton and Harvard universities and at the University of London. He is the author of the award-winning John Adams and the Spirit of Liberty as well as Neoconservatism: An Obituary for an Idea.