We Are the Baby-Sitters Club: Essays and Artwork from Grown-Up Readers (Paperback) 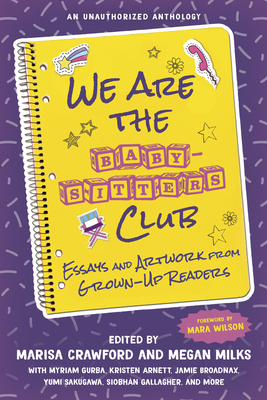 “We Are the Baby-Sitters Club is the ultimate companion guide for a generation of devout superfans. This book revisits the beloved series through grown-up eyes—but never loses the magic we all felt the moment we cracked open a fresh new book. BSC forever!" —Lucia Aniello, director and executive producer of The Baby-Sitters Club Netflix series

In 1986, the first-ever meeting of the Baby-Sitters Club was called to order in a messy bedroom strewn with RingDings, scrunchies, and a landline phone. Kristy, Claudia, Stacey, and Mary Anne launched the club that birthed an entire generation of loyal readers.

Ann M. Martin’s Baby-Sitters Club series featured a complex cast of characters and touched on an impressive range of issues that were underrepresented at the time: divorce, adoption, childhood illness, class division, and racism, to name a few.

In We Are the Baby-Sitters Club, writers and a few visual artists from the original BSC generation will reflect on the enduring legacy of Ann M. Martin’s beloved series, thirty-five years later—celebrating the BSC’s profound cultural influence.

&nbsp; One of LitHub's Most Anticipated Books of 2021, We Are the Baby-Sitters Club looks closely at how Ann M. Martin’s series shaped our ideas about gender politics, friendship, fashion and beyond.

Marisa Crawford is a poet and cultural critic whose writing has appeared in The Nation, VICE, Bitch, BUST, Ms., The Rumpus, Hyperallergic, and elsewhere. She is the author of two collections of poetry and the founder of Weird Sister, a website and organization that explores the intersections of feminism, literature, and pop culture.

Megan Milks is an award-winning fiction author with a debut novel forthcoming in 2021. Their stories have been published in three anthologies, as well as journals including Fence, PANK, LIT, and Yes Femmes. Their critical writing has appeared in Bookforum, 4Columns, Los Angeles Review of Books, The New Inquiry, and elsewhere.

"We Are the Baby-Sitters Club is a complicated paean to Ann M. Martin’s serial magnum opus, grappling with its loose ends and blind spots through the passionate insight of grown-up fans; it’s a varied volume of deeply personal literary criticism that takes tween girls’ lives and culture seriously—finally!" —Johanna Fateman, founding member of Le Tigre

"More than a book about a series of books, it is an ode to the child readers we were, and the ways we have learned to name the experiences we couldn't find written."  —Melissa Febos, author of Abandon Me and Girlhood

"From brains and bodies to dating and dieting, and from race and representation to the cool, cute, and near queer, this pathbreaking book sheds light on readers’ active reception and critical reflections of the pop culture phenoms of their generation. An outstanding work that expertly and insightfully places girls and girlhoods at the center of analysis!" —Miriam Forman-Brunell, author of Babysitter: An American History

“One of my happiest moments of 2020 was binge-watching Netflix’s The Baby-sitters Club with my seven-year-old niece—it was the first time we ever watched something we were equally invested in. I’m excited to keep the BSC vibes going with this fun anthology, featuring work from Myriam Gurba, Kristen Arnett, and others.”—LitHub

"Turns out there were a whole lot of us obsessed with the Baby-Sitters Club! We Are the Baby-Sitters Club is the ultimate companion guide for a generation of devout superfans. This book revisits the beloved series through grown-up eyes—but never loses the magic we all felt the moment we cracked open a fresh new book. BSC forever!" —Lucia Aniello, director and executive producer of The Baby-Sitters Club Netflix series

"The Baby-Sitters Club taught a whole generation of American girls the importance of having a crew. This book is a reunion, a homecoming, an opportunity to connect with all the folks you grew up with but never even knew, a chance to really understand why these seven girls have stayed with us and shaped us for so many years. More than three decades after we joined them for the adventure of a lifetime, We Are the Baby-Sitters Club proves that the best friendships allow us to reminisce, to reflect, and to grow." —Brittney Cooper, author of Eloquent Rage


“An explorative collection of essays that sends you right back to those nostalgic moments of childhood.” —Shannon Wright, cocreator of indie bestseller Twins


"I picked up this collection because I was obsessed with the BSC as a child. I couldn't put it down because, as an adult, I am obsessed with the complexities of gender, friendship, race, and power. This anthology helped me connect my childhood and adult interests in a way that few things have. " —Ann Friedman, coauthor of Big Friendship: How We Keep Each Other Close