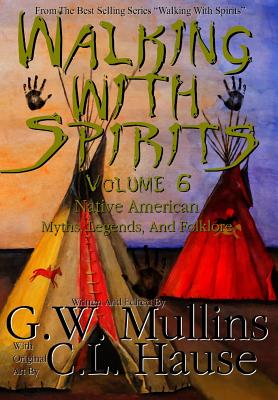 This is book number 6 in the Walking with Spirits series.

Author G.W. Mullins continues his highly successful Walking With Spirits Book Series with a sixth volume. This new installment in the series features new stories of the Native American Indians with new original art by award winning artist and illustrator C.L. Hause. Contained in 260 pages, "Walking With Spirits Volume Six" is a huge collection of Native American history. Following on the heels of the successful first five volumes, this sixth set offers many more wonderful and entertaining stories.

Through storytelling, the rich history of the Native American tribes is alive and well today. It has been shared and preserved and still pays tribute to fallen heroes of the past. Often, Native Americans have been misrepresented as violent people. It is through the glimpses into the past, and these stories much like the ones that are contained in this book, that you can see what a proud heritage they possess and how in tune with the Earth Native Americans really are.

Among the stories included in this volume are: All is finished, The Simpleton's Wisdom, How the Rabbit Lost His Tail, The Mice, The Owl, And The Hawk, The Creation, The Sparrow-Hawk and the Ha'kwa, The Princess Who Rejected Her Cousin, The Crow and the Hawk, The Red Eagle Song, Iya, the Camp Eater, The Red Eagle and the Owl, The Bee and the Asya, The Two Blind Old Women, Coyote Proves Himself a Cannibal, The Emergence, The Fox and the Wildcat, Huruing Wuhti and the Sun, The Kokoshori Katcina & the Shongopavi Maiden, The Origin of Some Mishongnovi Clans, The Tree-bound, The Enchanted Horse, The Son-In-Law Tests, Coyote and Sun, The Children of Cloud, The Creation of Man-Kind and the Flood, The Creation of the World, Old Man Above Creates the World, and many, many more.