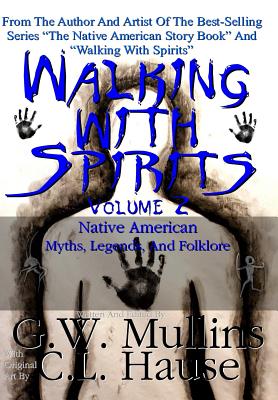 This is book number 2 in the Walking with Spirits series.

Author G.W. Mullins follows up his highly successful Walking With Spirits book release with a second volume. Light Of The Moon Publishing has released volume two in the series that features new stories of the Native Americans with all new original art by award winning artist C.L. Hause. Contained in 260 are some of the best folklore stories originating from the history of the Native American Tribes, as well as, sections on tipi etiquette and Native American quotes.

Included in this book are a large collection of Legends containing: The White Faced Bear, When the World was Young, Chipmunk and Bear, Why the Mountain Lion is Long and Lean, The Girl Who Climbed to the Sky, The Trickster's Great fall and his Revenge, Story of the Wildcat Clan, Run, Rabbit, Run, Dance In A Buffalo Skull, Manstin, The Rabbit, The Warlike Seven and many, many more.

This book also looks back at the Native American people's personal stories in their own words, with quotes spanning across history. Rounding out this book is a collection of Native American songs, poems and prayers.