And Still We Rise: A Novel about the Genocide in Bosnia (Paperback) 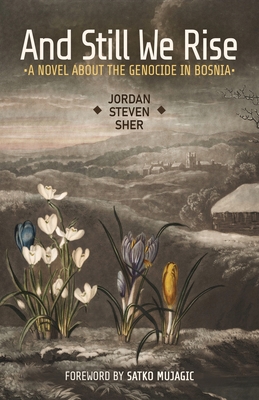 "This book deserves to be remembered as one of the best truth-based fiction works about the concentration camps in Prijedor that has been written." Satko Mujagic, survivor of the camps, activist

"A remarkable, inspiring story of survival during and after the genocide vividly capturing the tragedy of loss, and the resilience it takes to overcome. Although fictional, the story poignantly resembles the experiences of countless Bosnian families." Sandra Grudic, survivor. PhD student at Clark University's School of Genocide and Holocaust Studies

"An exceptional work of fiction that illuminates the struggles faced by many Bosnians during the Genocide. The book is profoundly moving and descriptive. It is a must read and must share " Dina Radeljas, PhD, survivor. Associate Professor of Social Sciences at Mohawk Valley Community College, Utica, NY

"A powerful story that needs to be heard and known. It puts a face on hatred and intolerance in Bosnia during the genocide in 1992 but it also portrays the human capacity to surmount that hate with bravery that gives you hope for a better tomorrow." Jasmina Dervisevic-Cesic, survivor and author of The River Runs Salt, Runs Sweet

"Sher's characters are fictional, but the events in the book, described with great skill and attention to detail, aren't. This a fascinating tale dealing with personal stories both during and in the aftermath of the Bosnian genocide, while still confidently delivering a strong message of peace and hope." Eldin Hadzovic, freelance journalist, Sarajevo, Bosnia and Herzegovina

Based on real-life events, in spring, 1992 in Prijedor, Bosnia, the Kovacevic's, a Muslim family, is confronted with the harsh reality that they are the targets of a brutal campaign to rid the country of non-Serbs. Neighbors turn on neighbors as the nationalist Serb propaganda leads to the so-called "cleansing" of communities that destroys families and their homes.

Elvir, and his fifteen-year-old son Amir, are sent to the Omarska concentration camp where torture and death haunt them daily. With a world that turns a blind eye, both suffer physically, psychologically, and spiritually. Yet they must rely upon each other if they are to survive. Hajra, Elvir's wife, and mother of their two younger children, Halima and Danis, are imprisoned in another camp called Trnopolje. They, too, must survive the atrocities that visit them including rape and witnessing beatings and murder. Hajra and the children encounter Elvir's brother, Tarik, who has been transferred to Trnopolje from another camp, only to see him disappear a short time later. As they all have learned too well in the camps, many disappear never to return.

The Kovacevic's eventually leave the camps and reconnect with Tarik's wife, Merjem, who is unable to accept the possibility of the loss of her husband. The families' trajectories lead them to journey together as they face unforeseen obstacles that must be overcome if they are to find true freedom from the trauma that continues to inform their decisions. As refugees, they move to Germany and then to America seeking to rediscover meaning in their lives after surviving genocide, grieving their losses, and to place roots in their new home.