Make it a Double: From Wretched to Wondrous: Tales of One Woman's Lifelong Discovery of Whisky (Hardcover) 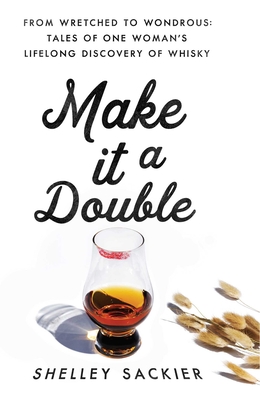 A witty and immersive look at the history, mythology, science, and magical touch that makes whisky taste like a drop of gold.

Braving the “all boys” clubhouse of the world of whisky has not been easy, but Shelley Sackier has managed to do just that out of her love for the drink. By turns funny and poignant and filled with vivid insight into this ancient craft, Make it a Double will persuade even a teetotaler to want a wee dram.

As a woman whose first sip of whisky created the female doppelganger of a Mr. Yuk sticker, that experience produced a sharp realization that the liquid was foul, poisonous, and needlessly dirtied a previously clean glass. And then she met Scotland. Her curiosity and growing passion lit a fire—igniting a desire to learn more about this craft’s rich and vivid history and the need to break out of an old life and to become the mother, partner, and woman she has always sought to be. After completing a course in Scotland’s famed Bruichladdich Distillery, Shelley begins her path of writing about—and working within—the world of whisky.

There has never been a better time for Shelley's inimitable voice to shed light on this intoxicating realm. Women are not only impressively contributing to the burgeoning sales of the spirit—making up nearly 40% of the whiskey-drinking population in the United States—but they are also growing in number as they enter in to, train within, and lead the industry with their determined creativity and innovation. In the tradition of Blood, Bones, and Butter, Make it a Double establishes Shelley Sackier as a fresh new voice in the lush world of culinary narrative.

For the past twenty-five years, Shelley Sackier has devoted her efforts toward creating a plainspoken, easygoing, and humorous grasp on the subject of whisky to welcome more people into this realm and to distill down this sophisticated spirit one simple sip at a time. She works as the Director of Distillery Education at Reservoir Distillery in Virginia, lives in in the Old Dominion, and is also a critically acclaimed author of three YA novels. Visit her at Shelleysackier.com.

“What a rich and rewarding blend of memoir, journal, and whisky insights. Shelley Sackier animates the text with her warm, engaging personality, and portrays her whisky journey with wit and wisdom. If this book was a dram it would have a rich, rounded character to savor, and lead to a long finish that provides plenty to think about.”
— Ian Wisniewski, writer and broadcaster, author of The Whisky Dictionary and four other books, contributor to Whisky Magazine and the Malt Whisky Yearbook

“Shelley Sackier weaves the magic of Scotland into a tapestry of flavors, aromas, sounds, Gaelic language, audacious wit, intriguing landscape, and of course, whisky. Her writing is artistry through wordsmithing leaving me with an unquenchable yearning for a wee dram of whisky and an urge to run through the house wearing nothing but a sporran. Here’s to hoping there’s a follow up to Make It A Double!"
— Dave Scheurich

“It's a story familiar to any whiskey geek—a sip of Scotch leads to an obsession and eventually a dream job at a distillery. Make it a Double follows one woman's journey merging her obsession with her profession."
— Maggie Kimberl, Content Editor, American Whiskey Magazine

"Sackier, director of distillery education at Virginia’s Reservoir Distillery, details her 'unquenchable thirst' for all things whisky in this spirited and witty blend of memoir and booze history. The result yields an exhilarating taste of the world of whisky."
— Publishers Weekly