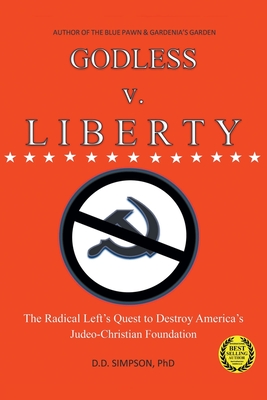 Our Founding Fathers had a revolutionary idea that the government should serve the people and not the other way around. But how does a group of men without blueprints build something from nothing? The answers laid in their Judeo-Christian faith, the Bible, and a collective understanding that laws, not people, should rule a nation. When done, our framers created the finest governing document known to civilization, the United States Constitution.

In our nation today, there's an attack taking place that threatens our most precious liberties. The secular left has, with precision, systematically pushed God away in an attempt to plant themselves at the center of the universe. At stake in this spiritual coup d' tat is whether we continue as a Judeo-Christian nation or go the way of every other great empire that has turned its back on Jehovah. Although socialism and communism had proved disastrous for hundreds of millions of people, the left still offers the false promise that it will be different this time. According to today's radical political leaders, all we need to do is put our trust in their godless secular philosophy and not that wordy archaic document that talks of inalienable rights, or worse yet, the Bible.

Since communism cannot coexist with God, the left has painstakingly spent the entire latter part of the twentieth century and the beginning of this one, rewriting history. It started with a creative Supreme Court decision that chose to ignore the first 150 years of our nation's fundamental religious principles. After the Court erected the wall of separation between church and state (Everson v. Board of Education, 1947), the following dominos began to fall:

- In 1962, school-sponsored prayer was outlawed in the public academia arena (Engel v. Vitale).

- Next to be shown the door was the Bible (School District of Abington Township v. Schempp, 1963).

- Followed by the crown jewel of the godless radicals judicial victories, the legal termination of the unborn (Roe v. Wade, 1973).

The secret formula of bypassing the people's representatives (Congress) and relying on unelected Supreme Court bureaucrats to make intemperate policies (aka judicial activism) was the backdoor the godless left had been searching for to chip away at the Constitutional rights of Americans.

In recent years, if there's anything the radical left has shown us, it's that there is no depth to which they won't descend, no lie too big to tell, and no conscience strong enough to restrain them from their ultimate goal, the quest for absolute power.

God, help us if they should ever succeed