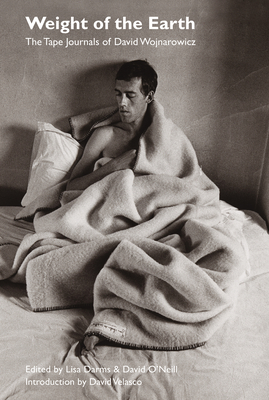 Audio journals that document Wojnarowicz's turbulent attempts to understand his anxieties and passions, and tracking his thoughts as they develop in real time.

In these moments I hate language. I hate what words are like, I hate the idea of putting these preformed gestures on the tip of my tongue, or through my lips, or through the inside of my mouth, forming sounds to approximate something that's like a cyclone, or something that's like a flood, or something that's like a weather system that's out of control, that's dangerous, or alarming.... It just seems like sounds that have been uttered back and forth maybe now over centuries. And it always boils down to the same meaning within those sounds, unless you're more intense uttering them, or you precede them or accompany them with certain forms of violence.
—from The Weight of the Earth

Artist, writer, and activist David Wojnarowicz (1954–1992) was an important figure in the downtown New York art scene. His art was preoccupied with sex, death, violence, and the limitations of language. At the height of the AIDS epidemic, Wojnarowicz began keeping audio journals, returning to a practice he'd begun in his youth.The Weight of the Earth presents transcripts of these tapes, documenting Wojnarowicz's turbulent attempts to understand his anxieties and passions, and tracking his thoughts as they develop in real time.

In these taped diaries, Wojnarowicz talks about his frustrations with the art world, recounts his dreams, and describes his rage, fear, and confusion about his HIV diagnosis. Primarily spanning the years 1987 and 1989, recorded as Wojnarowicz took solitary road trips around the United States or ruminated in his New York loft, the audio journals are an intimate and affecting record of an artist facing death. By turns despairing, funny, exalted, and angry, this volume covers a period largely missing from Wojnarowicz's written journals, providing us with an essential new record of a singular American voice.

David Wojnarowicz (1954–1992) was a painter, filmmaker, photographer, writer, AIDS activist, and one of the most prominent figures in the New York art world of the 1980s.

Lisa Darms is a writer, archivist and art appraiser. As the senior archivist at NYU's Fales Library and Special Collections, she worked with the archives of many downtown artists, including David Wojnarowicz. She is the editor of The Riot Grrrl Collection, which Sheila Heti called “alive with intimacy, passion, anger, and fun.” She lives in New York.

David O'Neill is a writer in New York and the managing editor of Bookforum.

David Velasco is the editor of Artforum and the author of Sarah Michelson.

There's a small and enviable group of visual artists whose work with the written word is every bit as impressive as their more well-known artistic expression. That's certainly the case with David Wojnarowicz, whose vital and impassioned works blended the personal and political to a stunning extent... With a major retrospective of Wojnarowicz's artwork opening at the Whitney next month, and given that many of his concerns about art, society, and governmental inaction remain all too relevant today, the time is right to experience his work—and The Weight of the Earth is a particularly direct way to do so.—LitHub—

....offers readers a unique perspective on the artist's inner life; it also sheds light on the daily life of individuals living with the threat of a deadly disease.