Words on Fire: The Power of Incendiary Language and How to Confront It (Paperback) 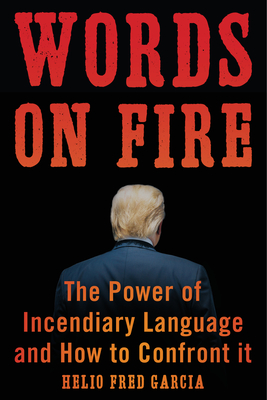 Words on Fire is about the power of communication to do great harm, and how civic leaders and engaged citizens can hold leaders accountable to prevent such harm. Author Helio Fred Garcia focuses on the language President Trump uses that conditions an audience to accept, condone, and commit violence against a targeted group, rival, or critics. The book includes a history of such rhetoric, and identifies a playbook consisting of twelve forms of communication that typically precede genocides and other acts of mass violence. The Nazis used all twelve; the Rwandan Hutu used ten. Trump uses all twelve. The language triggers lone wolves to commit violence. Since 9/11 the use of rhetoric that provokes violence has been known as "stochastic terrorism," a phrase that tends to confuse and that makes discussion difficult. The author suggests a more accessible name: lone-wolf whistle violence, on the model of "dog whistle" politics. The book draws on the most recent scholarship on lone wolves, their mindset, and what it takes to activate them to commit violence. The book documents Trump's increasingly dangerous rhetoric through his campaign and first term, and how some lone wolves were motivated by the rhetoric to commit violence. It also describes the changes in the nation's political culture and media that led to Trump's nomination and presidency. It profiles leaders who dialed back their rhetoric when it was shown to put people's lives in danger. Words on Fire closes with a call to action: We can learn the lessons of today to prepare for tomorrow, to help civic leaders, engaged citizens, journalists, and public officials recognize the phenomenon and take steps to hold other leaders accountable in the future when they use such language.