The Chart of Tomorrows: A Gaunt and Bone Novel (Paperback) 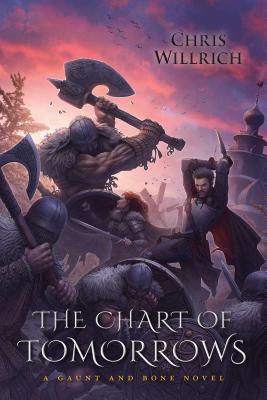 By Chris Willrich
$18.00
Unavailable, Out of Stock, or Out of Print

The poet Persimmon Gaunt and the thief Imago Bone had sought only to retire from adventuring and start a family, but they never reckoned on their baby becoming the chosen vessel of the mystical energies of a distant Eastern land. With their son Innocence hunted by various factions hoping to use him as a tool, they kept him safe at the cost of trapping him in a pocket dimension of accelerated time. Now free, the thirteen-year-old Innocence has rejected his parents and his "destiny" and has made dangerous friends in a barbaric Western land of dragon-prowed ships and rugged fjords. Desperately, Gaunt and Bone seek to track him down, along with their companion Snow Pine and her daughter A-Girl-Is-A-Joy, who was once trapped with Innocence too. But as the nomadic Karvaks and their war-balloons strike west, and a troll-king spins his webs, and Joy is herself chosen by the spirit of the very land Innocence has fled to, Gaunt and Bone find themselves at the heart of a vast struggle -- and their own son is emerging from that conflict as a force of evil. To save him and everything they know, they turn to a dangerous magical book, The Chart of Tomorrows, that reveals pathways through time. Upon the treacherous seas of history, Gaunt and Bone must face the darkness in each other’s pasts, in order to rescue their future.

Chris Willrich is a science fiction and fantasy writer best known for his sword-and-sorcery tales of Persimmon Gaunt and Imago Bone. He is the author of The Scroll of Years, The Silk Map, and The Dagger of Trust. Until recently he was a children's librarian for the Santa Clara County Library System, in the San Francisco Bay Area. His work has appeared in Asimov's, Beneath Ceaseless Skies, Black Gate, Fantasy and Science Fiction, Flashing Swords, The Mythic Circle, and Strange Horizons.

"Willrich puts the mystery back in magic and the majesty back in dragons. Gaunt and Bone are the Han and Leia of heroic fantasy." --Howard Tayler, creator of the Hugo award-nominated Schlock Mercenary (on The Scroll of Years)

"[A] rich sequel. ... this Chinese-inflected fantasy adventure romps along at a madcap pace. ... This lighthearted story is suitable for teen readers as well as adults." --Publishers Weekly (on The Silk Map)

"Reading Chris Willrich feels a bit like playing Dungeons and Dragons® with a drunken Will Shakespeare. Great fun, and beautifully written." --Saladin Ahmed, Hugo award-nominated author of Throne of the Crescent Moon (on The Scroll of Years)

"[The Scroll of Years is] by turns exciting, terrifying, sorrowful, uplifting, and bone-achingly beautiful. Through deep, layered characterization, the novel constantly surprises and strives to remind us to view individuals on their own terms and resist easy judgments. Like the titular magical scroll, this rich, fantastic tapestry of a story pulls you in and will not let you go, long after you've turned over the last page." --Ken Liu, Nebula, Hugo, and World Fantasy Award-winning author of The Paper Menagerie

"I was blown away by Chris Willrich and what he was able to pull off with his novel The Scroll of Years. I came into The Silk Map with great expectations, and, for the most part, they were met and even exceeded....The Silk Map is an epic addition to the Bone and Gaunt storyline."  - Kobold Press