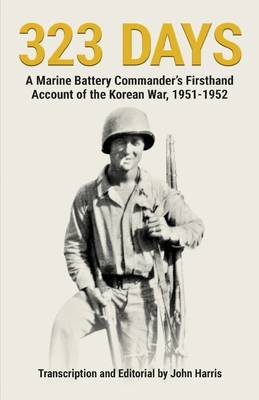 Albert Harris was a hometown hero in the small east Texas town of Greenville. He was captain and quarterback of the high school football team and married Mary Alice Norwood, the pretty daughter of the local county judge, in 1945. Trained as an artillery officer in the Marines, Lieutenant Harris joined the reserves shortly after his marriage.

When the Korean War broke out in the summer of 1950, Lieutenant Harris knew he would be leaving his wife and one-year-old son for the hills of North Korea. There was no more practice -- it was going to be the real thing.

In 323 Days, we travel back in time to 1951-1952 and the early stages of the Cold War. The United States was battling international communism and there was the ever-present danger of World War III. The Marine Corps had already suffered significant losses in the first year of the Korean War and Lieutenant Harris knew his tour of duty would not be easy.

During the war, Albert Harris wrote over 50 letters to Mary Alice detailing a wide variety of subjects, most direct from the battlefield. The letters are packed with information and reveal both a love story and a brutal war story. They are an important and unique viewing window to a critical segment of the Korean War and are published here for the first time.