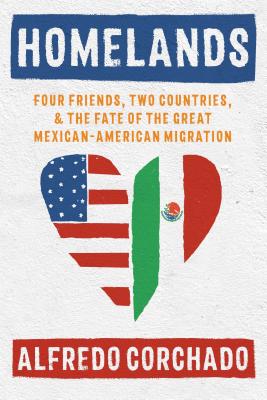 By Alfredo Corchado
$27.00
Unavailable, Out of Stock, or Out of Print

From prizewinning journalist and immigration expert Alfredo Corchado comes the sweeping story of the great Mexican migration from the late 1980s to today.

When Alfredo Corchado moved to Philadelphia in 1987, he felt as if he was the only Mexican in the city. But in a restaurant called Tequilas, he connected with two other Mexican men and one Mexican American, all feeling similarly isolated. Over the next three decades, the four friends continued to meet, coming together over their shared Mexican roots and their love of tequila. One was a radical activist, another a restaurant/tequila entrepreneur, the third a lawyer/politician. Alfredo himself was a young reporter for the Wall Street Journal.

Homelands merges the political and the personal, telling the story of the last great Mexican migration through the eyes of four friends at a time when the Mexican population in the United States swelled from 700,000 people during the 1970s to more than 35 million people today. It is the narrative of the United States in a painful economic and political transition.

As we move into a divisive, nativist new era of immigration politics, Homelands is a must-read to understand the past and future of the immigrant story in the United States, and the role of Mexicans in shaping America's history. A deeply moving book full of colorful characters searching for home, it is essential reading.

Alfredo Corchado is the México Border correspondent for The Dallas Morning News and author of Midnight in Mexico. He is a Nieman, Lannan, USMEX, Woodrow Wilson, and Rockefeller fellow and the winner of the Maria Moors Cabot and Elijah Parish Lovejoy Awards for Courage in Journalism. Corchado lives in Mexico City but calls the border home. @ajcorchado

"Corchado’s casual, friendly prose flies under the raging policy debates of the moment to engage us in incredibly personal stories of friendship and family. Before you realize it, he has defeated your cynicism and disarmed your political reflexes to bring you into a lively conversation on the nature of citizenship and culture in the most human of terms. Homelands helps us to see ourselves in each other, and in so doing it gets at the genius of a country that has always aspired to be one out of many." - Beto O'Rourke

"Timely . . . his book explains broad trends with engaging ease. He shows that the early movement out of Mexico was driven by environmental rather than strictly economic forces--Corchado's family was fleeing drought--and that more recent migrants have been more concerned with finding safety than fleeing poverty." - Washington Post

"In Homelands [Corchado] recounts his experiences and those of three friends--altogether, three Mexicans and an American of Mexican descent--as they grapple with having two countries to call home. . . It eloquently chronicles the effects of the North American Free-Trade Agreement between Mexico, America and Canada, the militarisation of the border after the attacks of September 11th 2001 and Mr Trump's victory." - The Economist

"A mix of memoir and deep research into various Mexican and American political immigration issues, exploring complications of life on both sides of the border . . . An affecting, timely book." - Kirkus Reviews

"In addition to providing historical context for the current debate on immigration, this book is a timely and personal meditation on the concept of 'migrant' in the United States." - Publishers Weekly

"The latest from the Dallas Morning News' award-winning borderland correspondent is a breezy, expansive narrative that traces the Great Mexican Migration of the second half of the twentieth century." - Booklist

"A sensitive, thought-provoking self-portrait of Mexican Americans who, wherever they go, call the borderlands home." - Library Journal

"Economic needs, shared history, culture and intimate ties all seem likely to outlast the most recent wave of anti-immigrant hostility. 'Can we live without one another, Mexico and the United States? Can we even imagine that?' Why, this book asks, would we even want to?" - Starred review, Shelf Awareness

"With the country at odds over immigration, now is the perfect time to learn more about the issue. Journalist Alfredo Corchado provides an opportunity in his latest book, Homelands: Four Friends, Two Countries, and the Fate of the Great Mexican-American Migration. In it, he shares the experience of coming to America using his own story and those of three friends; Corchado follows them over the course of three decades." - Bustle

"Corchado, the border-Mexico correspondent for the Dallas Morning News, chronicles these friendships as a backdrop for a new book that blends his personal experiences with his acclaimed reporting. Homelands examines the complicated, symbiotic relationship between the United States and Mexico, and how it has affected Mexican-Americans over the last several decades." - NBC News

"Vividly and entertainingly rendered . . . Homelands performs a valuable service. Politics, after all, isn't the only way that a disenfranchised and vilified community can counteract the stereotypes, misunderstandings, and even stupidities imposed by others. It can also do so if its expatriate sons and daughters, who have traveled far and succeeded, despite the odds, return to help. These voices, like Corchado's, will make the voyage easier for those who will surely follow." - Texas Monthly

"Corchado reports from across borders with the advantage of seeing the world with multiple perspectives. In the end, it's those who have the least who inspire Corchado the most. No matter where we call home, this book is an inspiration." - Sandra Cisneros, author of HOUSE ON MANGO STREET

"For Mexican-Americans, Mexican always comes first—this describes the story of Alfredo Corchado, the son of farmworkers who arrived following the Bracero Program. Call it determination, call it ganas, but Corchado rises above his rural circumstances to become a much-sought-after journalist. During his formation, he befriends three likeminded men, compas we call them in Spanish. Offering a balance of honest personal anecdotes and clear-eyed assessment, Corchado reveals what immigration is truly about. A book like this doesn’t happen often." - Gary Soto, author of THE ELEMENTS OF SAN JOAQUIN

"Alfredo Corchado's soul is fondly and firmly rooted in both the U.S. and his native Mexico. In tracing the life journeys of himself and three friends, he provides a window to the migrating millions helping to transform North America in the 21st Century. Homelands is an evocative and essential tale for our times." - Dudley Althaus, Mexico Correspondant, The Wall Street Journal

"Alfredo Corchado's moving and deeply personal story traces through his own journey and those of three friends, the odyssey of generations of Mexican immigrants. Homelands is a masterful tale--both heartfelt and informative. Pitch perfect." - Jose de Cordoba, Latin America Correspondent, THE WALL STREET JOURNAL

"Homelands rings true to the heart. A must read for anyone who has ever gotten on the trail north or south, east or west, this book can help you get there, help you reinvent yourself, help you ride the fierce convulsing rapids of life so that when you arrive, you arrive at journey’s end holding the prize—the dream of you, fully realized and singing loud over the land!" - Jimmy Santiago Baca, author of A PLACE TO STAND

"HOMELANDS is the sort of story we need now--a book that examines big, urgent themes through the particulars of individual lives. By straddling worlds, speaking two languages, moving across the permeable border that separates the U.S. and Mexico, and explaining the U.S. to Mexicans and Mexico to Americans, Alfredo Corchado is an ambassador for what is finest in both countries. I salute him with a raised glass of tequila." - Philip Conors, author of FIRE SEASON: FIELD NOTES FROM A WILDERNESS LOOKOUT

"America’s history and guiding myth is that of the immigrant, reflecting the waves of English, German, Italian, Irish, Chinese, and so many more that have come, settled, and prospered. In this beautifully written book, Corchado narrates the most recent chapter of this ongoing story. He masterfully writes through the story of four friends, the experiences of the more than 35 million Mexicans and Mexican Americans, and how they are shaping the United States even as it shapes them." - Shannon K. O'Neil, Council on Foreign Relations and author of TWO NATIONS INDIVISIBLE: MEXICO, THE UNITED STATES, AND THE ROAD AHEAD

"Alfredo Corchado has written a book that comes along just when we need it most. We are a country that is always defining and redefining itself, a nation that is at constant war with itself regarding its own identity. He has taken the story of four Mexican-Americans who have lived all their adult lives in America and turned their experiences into THE STORY OF AMERICA, an America that takes them in and welcomes them, helps them to rewrite their lives and their identities--then takes what they have to offer, rejects them, then hates them. This is a story of exile and belonging, of yearning and nostalgia, not simply a nostalgia for a home country that has been left behind but a story of a nostalgia for an America that has only existed as a promise that has never been fulfilled. We pine for America but what are we pining for? If you want to meditate on who we are as a nation and take a look at some hard truths of who we are, then read this book. Then read it again." - Benjamin Alire Saenz, winner of the PEN Faulkner award for Fiction and author of EVERYTHING BEGINS AND ENDS AT THE KENTUCKY CLUB

"Alfredo Corchado is a master storyteller who weaves together a personal narrative about discovery and identity with the larger story of the relationship between Mexico and the United States. Homelands is a must read for anyone who wants to understand why Mexico matters for the future of the United States--and what it means to claim both countries as one's home. It is both a highly engaging read and a compelling analysis of what unites and what still divides us." - Andrew Selee, President of the Migration Policy Institute and author of VANISHING FRONTIERS: THE FORCES DRIVING MEXICO AND THE UNITED STATES TOGETHER

"Alfredo Corchado is a master storyteller. Homelands is a compelling and heartfelt homage to friendship and to the inextricable bond between Mexico and the United States. Corchado offers us a much needed reminder, in a time of divisive anti-immigrant rhetoric, of the efforts and sacrifices Mexicans have made to help build America and how much richer our nation is because of it." - Melissa del Bosque, author of BLOODLINES

"No one can really understand the U.S.-Mexico borderlands . . . Perhaps the closest one can get is to hear from someone with a foot on both sides of the site of President Donald Trump’s proposed wall (much of which has already existed for 20 plus years). In that sense, Dallas Morning Newsborder reporter Alfredo Corchado is someone whose feet, arms, hands, legs, mind and spirit have spanned both sides of that divide. It’s a world that he describes with far more eloquence and clarity than I could muster in his new book, Homelands: Four Friends, Two Countries, and the Fate of the Great Mexican-American Migration." - The Providence Journal

"Corchado deftly interweaves his search for belonging with, for example, a sharp analysis of how NAFTA reshaped Mexico’s economy." - Texas Observer, naming Homelands one of "Our 10 Favorite Texas Books of 2018"