A Guest in the House of Hip-Hop: How Rap Music Taught a Kid from Kentucky What a White Ally Should Be (Paperback) 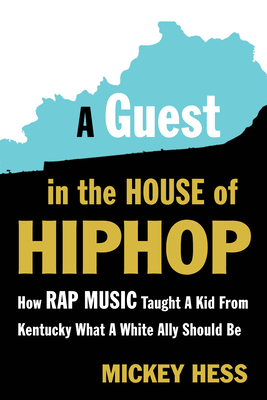 Born in rural Kentucky, Mickey Hess grew up listening to the militant rap of Public Enemy while living in a place where the state song still included the word "darkies." Listening to hip-hop made Hess think about what it meant to be white, while the environment in small-town Kentucky encouraged him to avoid or even mock such self-examination.

With America's history of cultural appropriation, we've come to mistrust white people who participate deeply in black culture, but backing away from black culture is too easy a solution. As a white professor with a longstanding commitment to teaching hip-hop music and culture, Hess argues that white people have a responsibility to educate themselves by listening to black voices and then teach other whites to face the ways they benefit from racial injustices.

In our fraught moment, A Guest in the House of Hip Hop offers a point of entry for readers committed to racial justice, but uncertain about white people's role in relation to black culture.

Mickey Hess is Professor of English at Rider University and the co-author, with rapper Buddha Monk, of The Dirty Version: On Stage, in the Studio, and in the Streets with Ol' Dirty Bastard (Dey Street/HarperCollins, 2014). Hess is the author of Is Hip Hop Dead? The Past, Present, and Future of America's Most Wanted Music (Praeger 2007), and the editor of Greenwood Press's Hip Hop in America: A Regional Guide (2010) and Icons of Hip Hop: An Encyclopedia of the Music, Movement, and Culture (2007). His other books include the novel Nostalgia Echo (C&R, 2011) and the memoir Big Wheel at the Cracker Factory (Garrett County, 2008), which was featured as a Chicago Reader "Critic's Choice."