The Animals: A Novel (Paperback) 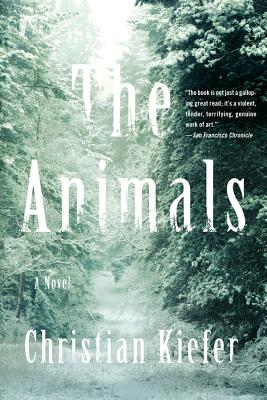 By Christian Kiefer
$15.95
Unavailable, Out of Stock, or Out of Print

Bill Reed manages a wildlife sanctuary in rural Idaho, caring for injured animals unable to survive in the wild —raptors, a wolf, and his beloved bear, Majer, among them. He hopes to marry the local vet and live out a quiet life, until a childhood friend is released from prison and threatens to reveal Bill’s darkest secrets. Suddenly forced to confront his criminal past, Bill battles fiercely to preserve both the shelter and his hard-won new identity. Alternating between the past and the present, The Animals builds powerfully toward the revelation of Bill’s defining betrayal—and the drastic lengths he’ll go to in order to escape the consequences.

A rare young stylist, with an abundance of vivid, engrossing stories in his brain; Christian Kiefer is a genuine find.
— Richard Ford

Eloquent and shattering. . . . This novel embodies why we write and why we read.
— Kirkus Reviews, Starred Review

An unusual and compelling amalgam of noir classic. . . . This tough-minded thriller weaves a hot red thread through an introspective, sensuous landscape, a meditation on instinct, memory and the nature of friendship between species and between men.
— Janet Fitch, author of Paint it Black and White Oleander

Laughter will rush through tears for readers of this American masterpiece.
— Lydia Netzer, author of Shine Shine Shine

I couldn’t read the novel fast enough, yet there were passages that I made myself read over and over again. You must read what is sure to be on many ‘Best of’ lists for 2015.
— Joe Hartlaub - Bookreporter.com