A Story of Men (Hardcover) 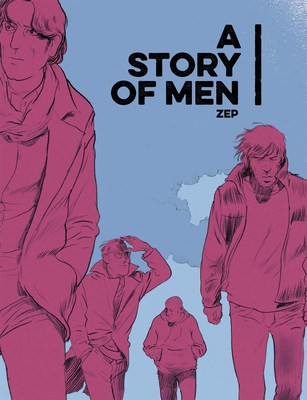 An original graphic novel from superstar European comics creator Zep, in English of the first time.

They were backstage when it happened. Just feet from the BBC cameras. Tricky Fingers were going to play live on TV.

But they didn't. Instead they broke up and never played together again.

Sandro, the frontman, went on to fortune and fame. The rest of the band did not.

Eighteen years later Sandro calls his former bandmates together for a weekend of reconnecting, to find out where life has taken them and how their fortunes have faired, to see if they've learned anything since they were teenagers—but memories can be hard to forget. And unknown secrets even harder to swallow.

Join Sandro, Evan, Frank and JB—four friends separated by time, distance and status—as they explore their history, their lives, and their friendship. This is their story—a story of men.

Born in 1967 in Switzerland, Zep—his real name is Philippe Chappuis—derives his pen name from a fanzine that he created at age 12 when he was a fan of Led Zeppelin. Drawing and inventing stories from a tender age, he later enrolled in the Ecole des Arts Décoratifs in Geneva. In 1992, Zep laid down some of his childhood memories in a sketchbook, an act giving birth to the character Titeuf who would become the best-known little boy in French comics. Today, Titeuf (translated in English as “Tootuff”) has become a publishing phenomenon, popular amongst children and their parents, with 13 books published, millions of copies printed, and a cartoon series broadcast since 2001 in 240 countries and in 35 languages. Titeuf has also become one of the strongest trademark licences on the French market, generating products in over 30 categories. Yet Zep is also the author of many other works for children and young people—but not exclusively. He is eminently the author of Le Guide du zizi sexuel (text by Hélène Bruller), a humorous practical guide on sexuality for children and their parents, now a must-have for families (2 million copies sold). In 2007, the Cité des Sciences et de l’Industrie in Paris inaugurated an exhibition adapting Le Guide du zizi sexuel that attracted record-breaking crowds (350,000 visitors) before travelling to Switzerland and Belgium. In 2004, Zep won the Grand Prix d’Angoulême for his body of work. This is the most prestigious prize for European comic book writers.