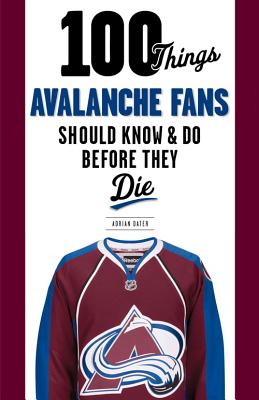 Most Colorado Avalanche fans have attended a game at the Pepsi Center, seen highlights of a young Joe Sakic, and were thrilled by the team's run to the Stanley Cup in its inaugural season in Denver. But only real fans know how many players have had their numbers retired or why the team's name isn't the Rocky Mountain Extreme. 100 Things Avalanche Fans Should Know & Do Before They Die is the ultimate resource guide for true fans of Colorado hockey. Whether you're a die-hard fan from the days of Marc Crawford and Patrick Roy or a new supporter of Gabriel Landeskog and Matt Duchene, this book contains everything Avalanche fans should know, see, and do.

Adrian Dater covered the Colorado Avalanche for 20 years for The Denver Post, before moving on to become the lead NHL columnist of Bleacher Report. Dater, who started out at the Concord Monitor was also a lead NHL writer for Sports Illustrated from 2011-13. He is the author of seven books. He lives in Thornton, Colorado. Joe Sakic led the Colorado Avalanche to Stanley Cup titles in 1996 and 2001. The team's long-time captain won the Conn Smythe Trophy in 1996, the Art Ross Trophy in 2001, and was inducted into the Hockey Hall of Fame in 2012. His number was retired by the Avalanche in 2009. He is currently the team's executive vice president of hockey operations. He lives in Colorado