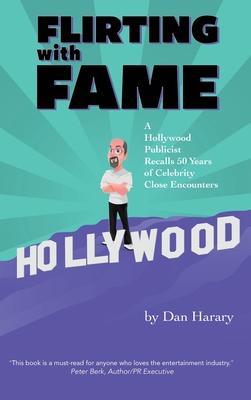 "I enjoyed Flirting With Fame because Dan is so open and honest about his encounters with celebrities - some very funny, some odd and some even hard to believe - but all told from an'everyman's' point of view. He quite often found himself in rather bizarre circumstances while interacting with famous people - like having a staring contest with Barbra Streisand, twice; or smoking a joint in silence with Jill Clayburgh in Central Park; or talking with Billy Crystal about Chinese food at Sid Caesar's funeral. Dan successfully encapsulates 50 years of 'celebrityclose encounters' into this book, all while serving as a skillful narrator."

About the AuthorBorn and raised in Asbury Park, New Jersey, Dan Harary has been working as an entertainment industry publicist in Hollywood for over 40 years. As the founder of The Asbury PR Agency in Beverly Hills, CA, Dan often found himself standing side-by-side with dozens of the 20th Century's most famous movie, TV, pop and rock music stars. As a teenager between 1972-74, Dan was the stage manager and lighting director for The Sunshine Inn, where Bruce Springsteen began his career. After graduating from Boston University's School of Communications, Dan's career path included in-house positions with Columbia Pictures, the American Film Institute, the Playboy Channel, Columbia Pictures Television, and two of Hollywood's most prominent entertainment PR agencies. Dan launched his own Asbury PR Agency in 1996. The father of two adult children, Dan lives in Beverly Hills, California.