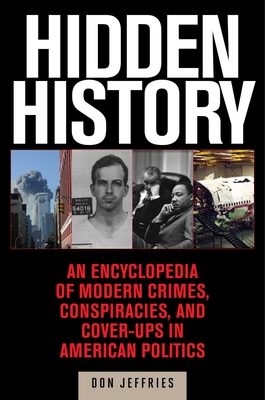 By Donald Jeffries
$24.95
Unavailable, Out of Stock, or Out of Print

Learn about all the secrets our government has kept for the past fifty years.

Starting with the assassination of President John F. Kennedy, Don Jeffries chronicles a wide variety of issues that have plagued our country’s history. Whether it’s the assassinations of MLK and RFK, Iran-Contra, the Oklahoma City bombing, TWA Flight 800, voting fraud, or 9/11, every major disaster or war that we’ve witnessed has somehow been distorted by those who are supposed to be protecting us.

Jeffries also delves into extensive research on the death of John F. Kennedy Jr., and you’ll be shocked by what he finds out.

So whether you’ve only heard bits and pieces of these stories or have read several books on the topics, Hidden History is the book that belongs in every conspiracy theorist’s library, as the information included in this encyclopedia has never been collected together in any other published work available. So sit down, strap in, and get ready to be shocked and awed by how much has been hidden from you by our government over the past fifty years.

Skyhorse Publishing, as well as our Arcade imprint, are proud to publish a broad range of books for readers interested in history--books about World War II, the Third Reich, Hitler and his henchmen, the JFK assassination, conspiracies, the American Civil War, the American Revolution, gladiators, Vikings, ancient Rome, medieval times, the old West, and much more. While not every title we publish becomes a New York Times bestseller or a national bestseller, we are committed to books on subjects that are sometimes overlooked and to authors whose work might not otherwise find a home.

Donald Jeffries has been researching the JFK assassination since the mid-1970s, when he was a student volunteer with Mark Lane’s Citizens’ Committee of Inquiry. He is the author of the 2007 novel The Unreals. He lives in Virginia with his wife and two children.