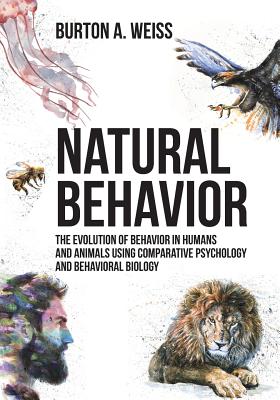 By Burton A. Weiss
This Book Is Not Sold Online - Inquire In Store

Natural Behavior provides seminal insights into the evolution of animal and human behavior for enthusiasts of Comparative Psychology and Behavioral Biology. Evolution and the behavior of the animal kingdom are discussed with new concepts on science, learning and instinct, and population phenomena. Hominization, interaction with Neanderthals, how the brain evolved, and the impact on the World are described with new views.

The origin of our scientific concepts and the trend away from the egocentric position, placing humans at the center of the universe, is considered, along with the status of religion and how the fit with science is positive. This volume carefully explains evolution and the central role of behavior in natural selection. The range of animal behavior from single cells to people is covered, as are, topics like European settling of the New World first, and the effects of humans on the planet.