The Fall of the House of West (Battling Boy #2) (Paperback) 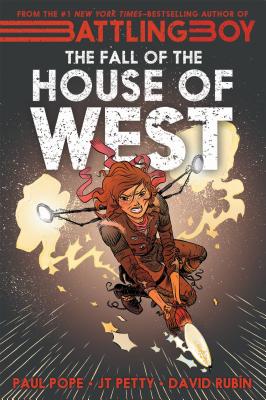 This is book number 2 in the Battling Boy series.

Aurora West is on the verge of solving the mystery of her mother's death, but it's hard keeping her efforts a secret from her grieving father, the legendary monster-hunter Haggard West. Between her school work and her hours training and hunting with her dad, Aurora is hard-pressed to find time to be a secret sleuth. But she's nothing if not persistent.

What Aurora doesn't realize is that she's about to blow open a secret that may very well destroy what's left of her family...and, indeed, all of Arcopolis.

From Paul Pope, the legendary creator of Battling Boy, teamed up with JT Petty and David Rubín, comes the nail-biting sequel to The New York Times bestselling The Rise of Aurora West!

David Rubin is a Spanish cartoonist who has published several critically-acclaimed graphic novels including The Hero and Beowulf. He has also directed an animated feature film, Spirit of the Forest, and has been the subject of a documentary film himself. Rubin is the illustrator of two Battling Boy prequels: The Rise of Aurora West and Fall of the House of West (written by Paul Pope with JT Petty).