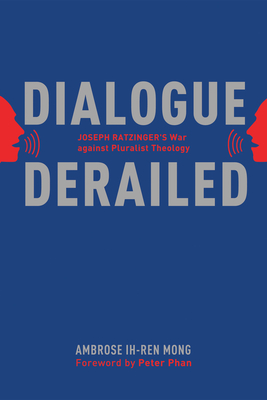 Joseph Ratzinger has shaped and guided the church's understanding of its mission to proclaim the good news, as well as to forge good relations with non-Catholic Christian communities, other religious traditions, and the secular world at large. Through a critique of Ratzinger's theology, this book draws attention to the importance of theological discourses originating from non-European contexts. Mong highlights the gap between a dogmatic understanding of the faith and the pastoral realities of the Asian church, as well as the difficulties faced by Asian theologians trying to make their voices heard in a church still dominated by Western thinking. While Mong concurs with much of Ratzinger's analysis of the problems in modern society--such as the aggressive secularism and crisis of faith in Europe--he focuses attention on the realities of religious pluralism in Asia, which require the church to adopt a different approach in its theological formulations and pastoral practices. ""With painstaking research, impeccable scholarship, penetrating analysis, and exemplary fair-mindedness, Mong digs deep into Ratzinger's . . . background to reveal his Eurocentric bias. . . . His work is the first analysis and assessment of the Bavarian theologian's work from the perspective of Asian realities."" --From the preface by Peter C. Phan ""Mong's analysis of Joseph Ratzinger's fight against the 'dictatorship of relativism' is comprehensive and penetrating, enough to recommend the book to anyone who cares about the contours of contemporary Catholic theology. But the book's greatest contribution lies in showing how Ratzinger's remedy for European relativism becomes toxic when forced upon Asians who do not suffer from this disease--an example of how even the best ideas can damage us when applied inappropriately."" --Scott Steinkerchner, Blessed Sacrament Priory, Madison, WI ""If theologians, like Ratzinger, begin from a perspective of the priority of the universal church over the local; if they emphasize the vast cultural riches of the West and have a Western aesthetic, they will end up at odds with theologians--particularly those from Asia--who work from a conviction of the local church's autonomy and cultural validity. Mong carefully and respectfully presents Ratzinger's entire theological system and argues that as brilliant as it is, it is unable to dialogue with the cultural and religious context of Asia, or anyplace except the developed West."" --Stephen B. Bevans, Catholic Theological Union, Chicago, IL Ambrose Ih-Ren Mong, OP, is visiting professor at the University of Saint Joseph, Macau, and part-time lecturer at The Chinese University of Hong Kong. He holds an MA in English from the University of British Columbia, an STB from the Angelicum, Rome, and an MPhil and PhD in Religious Studies from The Chinese University of Hong Kong.