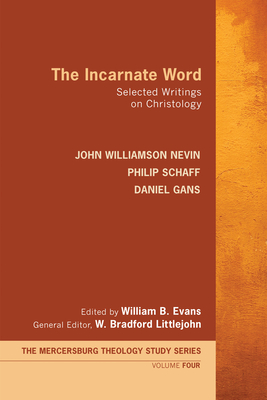 The Incarnate Word contains a selection of the key writings on the doctrines of Christology produced by the theologians of Mercersburg Seminary during the middle of the nineteenth century. Despite the seminary's small stature and marginal position within American religious life, these texts represent some of the most profound wrestlings with the doctrine of the person of Christ that appeared in antebellum America, engaging the latest in German theological scholarship as well as the riches of the Christian tradition. As such, they command more than mere historical interest, providing rich conversation partners for contemporary debates in Reformed Christology, and anticipating the insights of such key twentieth-century theologians as T. F. Torrance. The present critical edition carefully preserves the original texts, while providing extensive introductions, annotations, and bibliography to orient the modern reader and facilitate further scholarship. The Mercersburg Theology Study Series is an attempt to make available for the first time, in attractive, readable, and scholarly modern editions, the key writings of the nineteenth-century movement known as the Mercersburg Theology. An ambitious multi-year project, this aims to make an important contribution to the scholarly community and to the broader reading public, who can at last be properly introduced to this unique blend of American and European, Reformed and catholic theology. ""Nevin is one of the most important theologians in all of American history but sadly he is neglected by nearly all but fervent acolytes. The writings in this volume stand at the center of his oeuvre, and deserve a wide hearing from historians of religion, and especially theologians, who still have much to learn from this Christocentric, evangelical-Catholic intellectual (and his colleagues Schaff and Gans, also represented here.) The essays in your hand have been judiciously selected, well introduced, and helpfully annotated. They offer to a new generation of scholars and church folks a treasure trove of thinking on the incarnation of God."" --Douglas A. Sweeney, Professor of Church History and the History of Christian Thought, Trinity Evangelical Divinity School, Deerfield, IL ""The Mercersburg theologians, seeking a church that would be at once Catholic, evangelical, and reformed, remain relevant today for their recovery of biblical, patristic, and Reformation themes, unified by then new currents in German thought. These essays on Christology, ably edited by William Evans, give us insight into the heart of their theology. . . . His introductions and notes show clearly and articulately how the Mercersburg theologians linked the doctrines of incarnation, cross, resurrection, spirit and church, without the overemphasis on one or another of them that so often skews theological reflection."" --Eugene TeSelle, Professor emeritus of Theology and Church History, Vanderbilt Divinity School, Nashville, TN ""Rejecting the traditions of Princeton and New England, the Mercersburg theologians set forth a vibrant and mystical understanding of the living Savior which resourced and permeated their high ecclesiological and sacramental convictions, challenging the Reformed sensibilities of their days and continuing to inspire theologians today. The resultant collection will be of interest to church historians and doctrinal theologians, both those with particular interests in the Reformed tradition and those with wider concerns for the ecumenical conversation. Lucidly introduced, scrupulously edited, and beautifully presented, this text is a delightful addition to the library."" --Paul T Nimmo, Professor of Divinity, King's College, University of Aberdeen, Aberdeen, Scotland Authors: John Williamson Nevin (1803-1886), and Philip Schaff (1819-1893) were professors at Mercersburg Seminary of the German Reformed Church, Nevin being among the leading American Protestant theologians of his day and Schaff quickly risi.

Authors: John Williamson Nevin (1803-1886), and Philip Schaff (1819-1893) were professors at Mercersburg Seminary of the German Reformed Church, Nevin being among the leading American Protestant theologians of his day and Schaff quickly rising to become the nineteenth century's premier church historian. Daniel Gans (1822-1903) was a pupil of theirs and later German Reformed minister and writer. Editor: William B. Evans is the Younts Professor of Bible and Religion at Erskine College in South Carolina. The author of Imputation and Impartation: Union with Christ in American Reformed Theology (Paternoster, 2008), he has also written numerous articles on Reformed Christology, ecclesiology, and the Mercersburg theology. General Editor: W. Bradford Littlejohn is President of the Davenant Trust and the author of The Mercersburg Theology and the Quest for Reformed Catholicity (Pickwick, 2009), as well as two forthcoming books and several articles on Richard Hooker and the English Reformation.