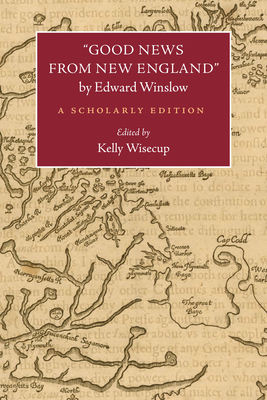 First published in 1624, Edward Winslow's Good News from New England chronicles the early experience of the Plimoth colonists, or Pilgrims, in the New World. For several years Winslow acted as the Pilgrims' primary negotiator with New England Algonquians, including the Wampanoag, Massachusett, and Narragansett Indians. During this period he was credited with having cured the Wampanoag sachem Massasoit, one of the colonists' most valuable allies, of an apparently life-threatening illness, and he also served as the Pilgrims' chief agent in England. It was in the context of all of these roles that Winslow wrote Good News in an attempt to convince supporters in England that the colonists had established friendly relations with Native groups and, as a result, gained access to trade goods. Although clearly a work of diplomacy, masking as it did incidents of brutal violence against Indians as well as evidence of mutual mistrust, the work nevertheless offers, according to Kelly Wisecup, a more complicated and nuanced representation of the Pilgrims' first years in New England and of their relationship with Native Americans than other primary documents of the period. In this scholarly edition, Wisecup supplements Good News with an introduction, additional primary texts, and annotations to bring to light multiple perspectives, including those of the first European travelers to the area, Native captives who traveled to London and shaped Algonquian responses to colonists, the survivors of epidemics that struck New England between 1616 and 1619, and the witnesses of the colonists' attack on the Massachusetts.

Kelly Wisecup is assistant professor of English at the University of North Texas and author of Medical Encounters: Knowledge and Identity in Early American Literatures (University of Massachusetts Press, 2013).