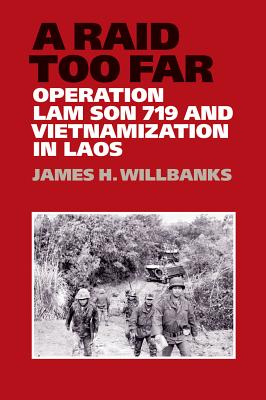 By James H. Willbanks
$35.00
Unavailable, Out of Stock, or Out of Print

The operation, dubbed Lam Son 719, went very well for the first few days, but as movement became bogged down the NVA rushed reinforcements to the battle and the ARVN forces found themselves under heavy attack. US airpower wreaked havoc on the North Vietnamese troops, but the South Vietnamese never regained momentum and ultimately began to withdraw back into their own country under heavy enemy pressure.

In this first in-depth study of this operation, military historian and Vietnam veteran James H. Willbanks traces the details of battle, analyzes what went wrong, and suggests insights into the difficulties currently being incurred with the training of indigenous forces.

JAMES H. WILLBANKS, General of the Army George C. Marshall Chair of Military History and director of the department of military history at the US Army Command and General Staff College in Leavenworth, Kansas, is also author of The Tet Offensive: A Concise History and Abandoning Vietnam.

“There is no serious full-length account of Operation Lam Son 719. There are a couple of 'pop' accounts of the battle, but no scholar has taken notice of this crucial moment in the Vietnam War. As Willbanks rightly points out, Lam Son 719 was the crucial test of America’s Vietnamization program. Thus it was the test of Nixon’s war. This book is badly needed. In short Lam Son 719 fills a huge gap in our historiographical understanding of the Vietnam War. It is a stand out work, one that will be of great importance in the world of professional academic historians and will be of great interest to a broader military history readership.”—Andrew A. Wiest, Distinguished Professor of History and Director of the Center for the Study of War and Society, University of Southern Mississippi; author, Vietnam's Forgotten Army: Heroism and Betrayal in the ARVN and The Boys of '67: Charlie Company's War in Vietnam

"Nobody today writes about the Vietnam War more lucidly or authoritatively than Jim Willbanks. A highly decorated veteran of that war himself, his exacting scholarship and precise writing style make A Raid Too Far a “must read” for all serious students of military history."- Maj. Gen. David T. Zabecki, PhD, Army of the United Stares, Retired Editor Emeritus, Vietnam Magazine
— Dr. Maj. Gen. David T. Zabecki

"A truly outstanding operational-level military history detailing one of the most significant, and still highly contested, campaigns fought during the latter stages of the Vietnam War.  Jim Willbanks expertly conveys a story that explains both the aspirations and limitations of President Nixon’s policy of Vietnamization. This is essential reading for anyone seeking clarity on Lam Son 719 and the larger U.S. withdrawal from Vietnam."-Gregory A. Daddis, Department of History, United States Military Academy, West Point
— Gregory A. Daddis

"A Raid Too Far is a gripping tale of bravery, courage, and arguably failed military and civilian leadership during one of the most heavily fought campaigns of the Vietnam War.  No one can describe the heroism of both American and Vietnamese combatants better than Jim Willbanks, a former advisor to ARVN forces."-Ron Milam, author of Not a Gentleman's War: An Inside Viewof Junior Officers in the Vietnam War
— Dr. Ron Milam

"This is a well-written and informative book. A good read for those interested in the Vietnam War." -- Military
— Military